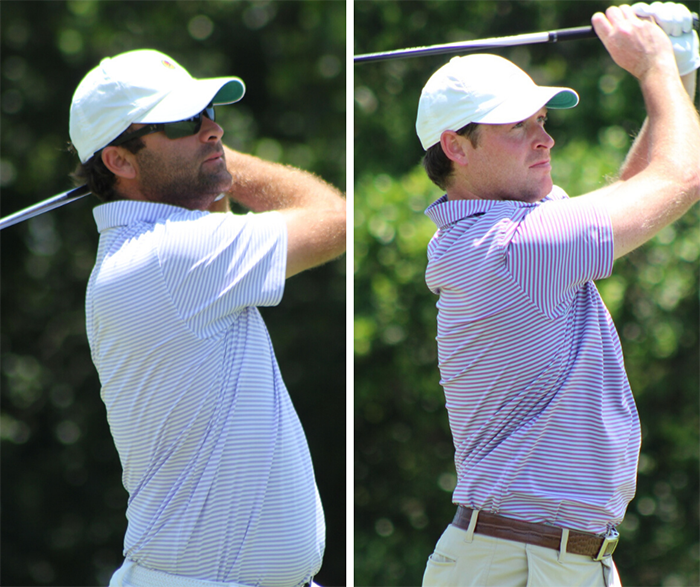 It was an exciting “Moving Day” on the South Course at Bayou Oaks at City Park in New Orleans. For the second day in a row, there was a shift atop the leaderboard at the 101st Louisiana Amateur Championship. Derek Busby of Ruston and Greg Berthelot of Baton Rouge are currently tied for the lead at eight-under par 208. Berthelot, the 2011 LGA Amateur Champion fired the low round of the day, a four-under par 68, to put himself in a great position to win his second title. He finished his round in dramatic fashion with an eagle at the par 5 18th hole. Berthelot will be seeking retribution from the 2019 LGA Mid-Amateur Championship where Busby defeated him in a sudden death playoff at Squire Creek Country Club. Busby, the 2017 LGA Amateur Champion, carded a solid 69 on Saturday. His round included six birdies and three bogeys. The leaderboard is stacked with the best amateur golfers in the state, and there are six players within five shots of the leaders. Grayson Gilbert of Monroe followed up his stellar second round 67 with a one-under par 71 today to get to five-under par 211. Sunday’s final round will have all the makings for an exciting finish. Berthelot, Busby, and Gilbert are scheduled to start their round at 10:40 AM.

Busby started his round one-shot behind 36-hole leader Buck Williams of New Orleans and dropped two shots after making a bogey on holes 1 and 2. After back-to-back pars, Busby made his first birdie of the day at the par 4 5th hole. He kept the momentum going with a par-birdie-birdie-par combo on his next four holes to make the turn at one-under par for the day. Busby made a par at the par 4 10th hole then tacked on another birdie at the par 5 11th hole. He made another bogey at the par 3 14th hole, but he would make back-to-back birdies on holes 16 and 17 and finish with a par on the 18th hole.

Berthelot was paired with Busby and Williams in the final group on Saturday. He also stumbled out of the gate with a bogey at the par 4 1st hole. He made back-to-back pars then birdied the par 4 4th hole. His other birdies came at the par 4 6th hole, par 5 11th, and par 4 15th. He made a bogey at the par 3 14th hole. Berthelot drained a 15-foot putt to make the aforementioned eagle on #18.

There is a four-way tie for fourth place at four-under par between: defending champion John Humphries of Woodworth, Eli Ortego of Broussard, Nicholas Arcement of Thibodaux, and Buck Williams of New Orleans.

The South Course at Bayou Oaks at City Park, which opened in 2017, is hosting the Louisiana Amateur Championship for the first time in its history. It’s especially fitting that the 101st edition of this championship is on the property of the City Park Golf Complex that originally opened in 1902. The golf course drew rave reviews from this field of the top amateur players in Louisiana. The course played to a par of 72 at approximately 6,920 yards on Saturday.