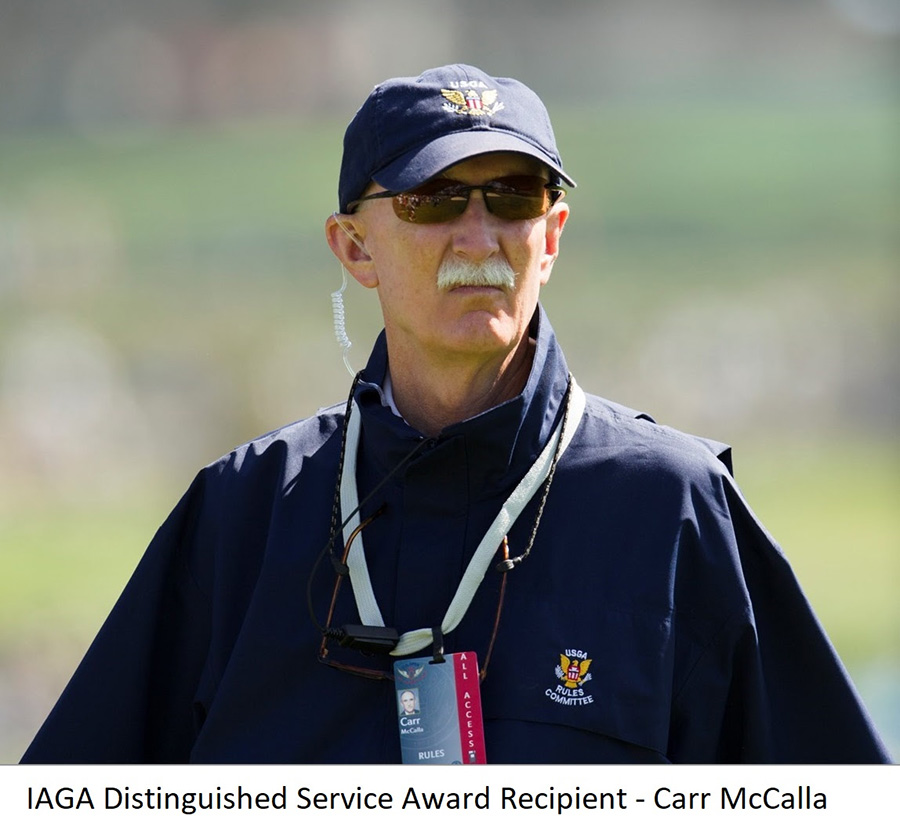 Integrity, leadership and passion are words that come to mind when Carr McCalla’s name is brought up. Recipient of the 2019 International Association of Golf Administrators’ Distinguished Service Award now comes to mind, too.

After 24-plus years of service to the game of golf, McCalla, a longtime Louisiana Golf Association Executive Director, will be honored with the IAGA Distinguished Service Award on Nov. 5 at the 2019 IAGA Annual Conference at the Monterey Plaza Hotel & Spa (Monterey, Calif.).

“It’s truly wonderful to be honored by your colleagues at the conclusion of one’s career,” said McCalla. “It’s humbling to receive the Award, and I’m extremely grateful for the Committee’s nomination.”

That impactful career, which includes an endless list of accomplishments, did not begin on grass but instead on a hardwood court. He spent time on the basketball coaching staffs at the University of Tennessee (1974-1976), University of New Orleans (1976-77), Marshall University (1977-78), and Murray State University (1978-79), before becoming Head Coach (1979-85) and Director of Athletics (1985-94) at Motlow (TN) College in Tullahoma, Tenn. It was during the summer of 1992 when McCalla’s golfing interest blossomed. His time spent with the Tennessee Golf Association as a P.J. Boatwright Intern sparked a new-found career path.

“That was right around the time when the USGA began the Boatwright internship funding. To make a long story short, I became a three-month intern and the stars all aligned for me. That was my initial foray into golf administration, and the experience and networking opportunities I got during my time with the TGA were invaluable,” said McCalla, 67, of Lafayette, La.

After his coaching and athletic administration career came to a close at the end of 1995, his devotion to the game of golf began. For the first seven years of his tenure with the LGA, McCalla was the only full-time staff member, administering handicapping services, course rating services, and Championships with the help of an intern and a small cadre of volunteers.

“It was the perfect fit. At the time, the LGA didn’t have experience with a full-time staff member, while I didn’t have any full-time experience in golf,” said McCalla. “I was very fortunate to get the opportunity, and obviously now looking back on it, I’m glad I got that chance.”

“Just the overall growth of the organization, really. That’s what I’m most proud of,” said McCalla. “When I first began, we didn’t have any individual membership. We had to convince our board that we needed to get into the handicapping business, and that was a big step for us. We wanted to do so much at the beginning, and it took us a little while to see the progress, but it became apparent soon after that we were headed in the right direction. ”

McCalla retired as Executive Director at the end of 2017 after 22-plus years of service. He continues to be involved with the organization as a Senior Advisor, helping in any role needed. His successor, Logan Ray, says he wouldn’t be where he is today without the guidance of McCalla, his mentor.

“Carr has set an example for me that is invaluable. He has been so influential for me not only in the office, but also in life,” said Ray. “Carr forged a new direction for the LGA and took the organization to new heights. Working under him, and with him, has been one of my best career experiences to date.”

According to Ray, McCalla’s accomplishments are even more impressive considering the integrity he displayed every single day, whether on the course or in the office.

“He was in this game for all the right reasons. Every day, I strive to live up to the bar and reputation for the LGA that he has set. Carr once told me that if you make decisions for the good of the game and do the right thing then the rest will take care of itself. That’s what he prides himself on, and he is well respected for it,” said Ray.

Outside of his unforgettable work with the LGA, McCalla made an impact nationally with his rules expertise. His appointment to the USGA Rules of Golf Committee (2000-2004) speaks to that fact. Additionally, McCalla served on Rules Committees at over 40 USGA Championships, including 16 U.S. Open Championships, in addition to four Master’s Tournaments (2000-2003).

But the contributions didn’t stop with the Rules book. McCalla served on Committees for both the USGA’s Regional Associations and Bob Jones Award, in addition to the IAGA Board of Directors from 1999-2007. He served as the IAGA President in 2005 – a presidency still remembered to this day.

“It was always about the example that he set for board members coming behind him. He was very dedicated to the IAGA board and to doing a great job. Carr exemplified one of the finest benefits of belonging to the IAGA, and that was his openness and approachability for new people coming into the organization,” said current IAGA President Mary Pomroy. “He was always ready to share his knowledge, experience, and often his questions as well. He always made me think. That’s a good leader.”

McCalla’s name being included among the IAGA Distinguished Serve Award recipients is one of the final touches on a career whose influence reached golfers everywhere, and for the better.

“I know there are some tremendous individuals on the list of [IAGA Distinguished Service Awards] winners. My initial response is my name isn’t worthy of being among them, and really, it’s an unbelievable honor,” said McCalla.

The International Association of Golf Administrators’ Distinguished Service Award is the Association’s highest honor. It was established to recognize individuals or groups whose actions have fostered the IAGA objectives as stated in its by-laws, “to promote and conserve the best interests and the true spirit of the game of golf as embodied in its ancient and honorable traditions.” The selection criteria includes, but is not limited to, the demonstration of superior or innovative administrative abilities, excellence in information exchange, and dialogue between golf administrators and golf organizations.