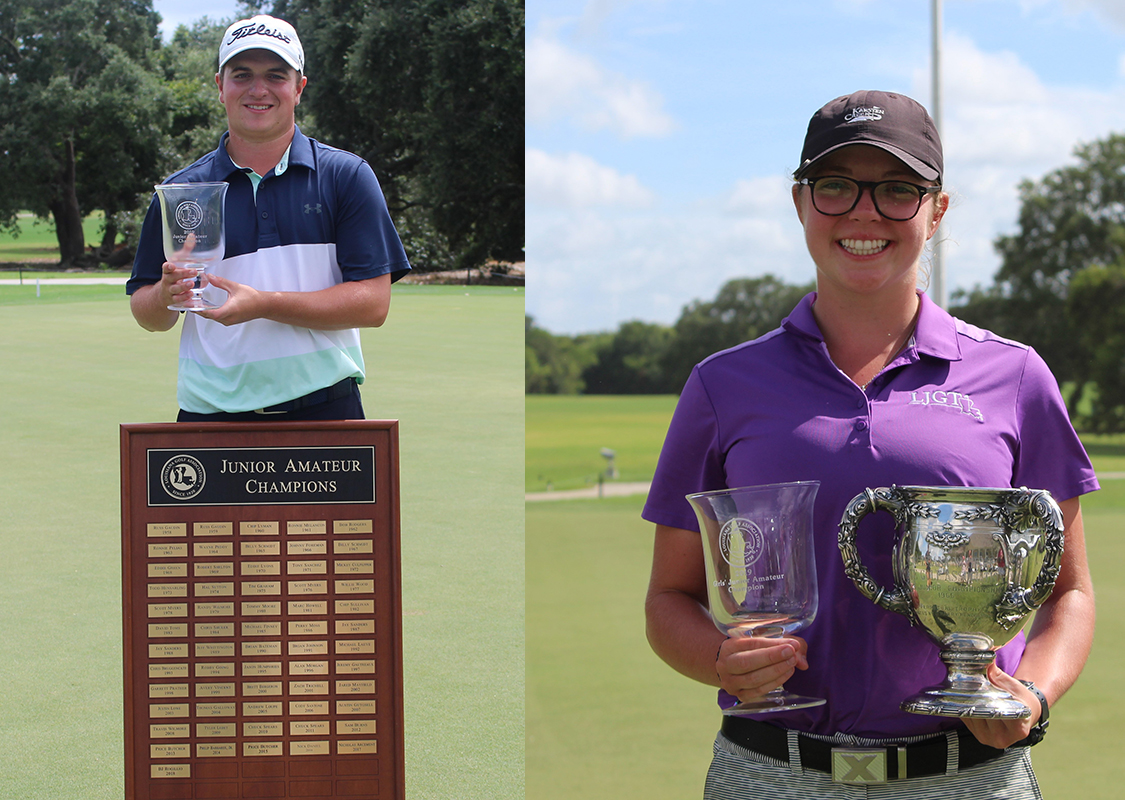 It truly was an incredible day of golf at Bayou Oaks at City Park in New Orleans. The brightest young stars in Louisiana junior golf showcased their talents on the magnificent Rees Jones designed South Course. Nicholas Arcement of Thibodaux captured the 62nd Louisiana Junior Amateur Championship after winning a sudden-death playoff over Matt Weber of Scott. Arcement drained a thirty-foot birdie putt on the first playoff hole, the par 5 18th (542 yards), to claim the victory in dramatic fashion. Arcement and Weber both finished the championship at ten-under par 134. Arcement, a rising high school senior, has committed to play college golf for LSU. This is Arcement’s second LGA Junior Amateur Championship, having won this event in 2017 at Tchefuncta Country Club. Arcement carded consecutive rounds of 67 to finish at ten-under par, the lowest total by two strokes in competitions that have been shortened to 36 holes.

Cassidy Lambert of Gretna won the 54th Louisiana Girls’ Junior Amateur Championship after carding rounds of 76-75 to finish at seven-over par 151. This makes it back-to-back wins for Lambert in The Big Easy as she also won this event last year at English Turn Golf & Country Club. Lambert’s successful title defense included six birdies over 36 holes. Her final round 75 started on Hole #10 and she struggled on her front nine, making the turn at six-over par 42. Lambert’s closing nine holes was a different story and she fired a bogey free 33. Kaitlyn Montoya of Shreveport (74-79/152) finished runner-up, and Sarah Hodson of Raceland (81-75/156) finished third.

The South Course at Bayou Oaks at City Park drained exceptionally well after taking on six inches of rain Wednesday morning. The first round of the LGA Junior Amateur commenced at 12:45 PM on Wednesday due to the weather delay, and lightning in the area forced a suspension of play at 5:43 PM that evening, with only four groups of competitors having completed their first round. Thursday’s weather was ideal, and the suspended first round resumed at 8:00 AM with the Second Round starting at the same time for the first group that had completed Round 1. After all of the delays, competitors were able to complete 36 holes to decide the championship. Friday’s Overall Championship final round was cancelled due to the imminent threat of Tropical Storm Barry.  Rounding out the top 5 in the Boys Championship are: 3.) Jake Marler of Shreveport (67-68/135), 4.) Luke Haskew of Baton Rouge (68-70/138), T5.) Chance Queen of Alexandria (71-69/140), T5.) Quinn Garcia of Covington (69-71/140).

Arcement’s win once again puts him in the impressive company of former LGA Junior Amateur Champions, including PGA Tour winners Hal Sutton, Willie Wood, David Toms, Brian Bateman, and current PGA Tour player PGA Tour Sam Burns.  Arcement received the “Past Champions’ Award” in the form of a $400 gift certificate that may be utilized in the Golf Shop at Bayou Oaks at City Park.  He will have his name engraved on a beautiful plaque that honors each of the past LGA Junior Amateur Champions dating back to 1958, and it will be displayed at his home club, LaTour Golf Club in Mathews, until the 2020 Championship. Lambert earned a $200 gift certificate and possession of the perpetual Girls’ Junior Amateur trophy for one year. Arcement and Lambert also each received a new Titleist golf bag embroidered with the LGA logo and “2019 LGA Junior Amateur Champion” signifying their victory. Arcement earned full exempt status with the American Junior Golf Association (AJGA). Other AJGA Performance Based Entry Stars were awarded to the boys as follows: Top 5 (12 Performance Stars), Top 10 (8 Stars), Top 15 (4 Stars). Lambert earned 8 Stars for her victory, and the Top 3 finishers secured 4 Stars.

Restored and reestablished in 2017, the South Course at Bayou Oaks at City Park also hosted the U.S. Amateur Championship Sectional Qualifier on Monday. This was the first LGA Junior Amateur Championship to be hosted by the facility. The South Course will host the 101st Louisiana Amateur Championship in 2020. The golf course was in excellent condition for this Championship and drew rave reviews from this field of the top junior golfers in Louisiana. The well-manicured course drained exceptionally well following the six inches of rain that hit the area on Wednesday. The greens were smooth rolled true at a 10.5 on the stimpmeter. Bayou Oaks at City Park (South Course) definitely provided a fun, yet stern test for competitors. The course played to a par of 72 at approximately 6,700 yards for the Overall Boys Championship and 5,700 yards for the Girls.