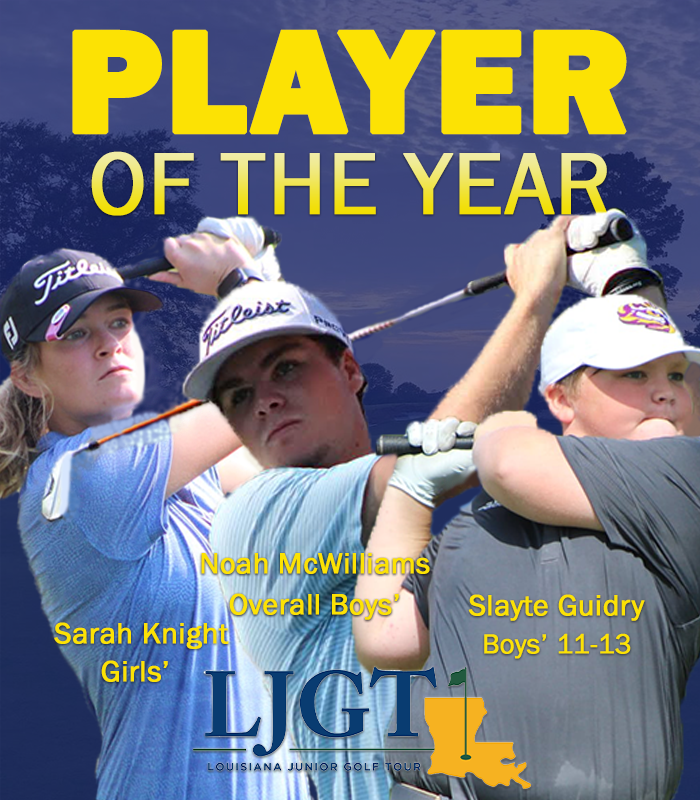 Knight wins her first POY award in dominating fashion. Knight finished out the year strong to pull ahead and win the title by 375 points over Sarah Meral and 480 points over Sydney Moss of Shreveport. Knight’s season started off with a bang by winning the 2021 Sam Burns Junior Four-Ball event with Meral as her partner. She would go on to make the Quarterfinals of the 93rd Louisiana Women’s Amateur, finish tied for fifth at the Gulf States PGA Junior Championship and finish as the runner-up in the 56th Louisiana Girls’ Junior Amateur Championship. On the Louisiana Junior Golf Tour, Knight would finish in the top 4 in each of the 5 events she started in including her three wins at The Querbes Park Golf Course, Lake Charles Country Club (LJGT Tour Championship) and Squire Creek Country Club (Sam Burns Junior Four-Ball). Knight will graduate from Ouachita Christian School in May of 2022 and will play college golf at The University of Louisiana at Monroe.

The Boys’ Player of the year was another tight race, which saw Noah McWilliams edge out Ben Blanco of Broussard by 66.25 points. McWilliams started off his season with a top 15 finish at the Sam Burns Junior Four-Ball Championship. He would then go onto to qualify for the U.S. Junior Amateur at the Country Club of North Carolina and later on finish tied for first place at the Gulf States PGA Junior Championship with Miles Merlin of Metairie. On the Louisiana Junior Golf Tour, McWilliams finished in the top two in each of the four stroke play events he started in including his win at Querbes Park Golf Course. McWilliams’ second place finish at the LJGT Tour Championship at Lake Charles Country Club clinched him the 2021 POY award, holding off a surging Blanco down the stretch. The McWilliams household has two Player of the Year trophies this season as Noah’s father Robby took home the 2021 Louisiana Golf Association’s Men’s Senior Player of the Year award. Noah is just a junior, set to graduate from Benton High School in May of 2023. He has not yet committed to a college golf program, but this honor is sure to increase that exposure and showcases the level of talent that McWilliams possesses.

The neck-and-neck, two horse race that was the Boys’ 11-13 POY race came down to the LJGT Tour Championship with Slayte Guidry coming out on top by only 32.5 points over Hudson Greene from Bossier City. The next closest players in rankings were 315 points behind Guidry and Greene. Guidry had a strong year that started out with a top 5 finish at the Sam Burns Junior Four-Ball and then went on to finish tied for third place at the Gulf States PGA Junior Championship 12 and Under division. Guidry kept the momentum going by finishing sixth at the 64th Louisiana Junior Amateur Championship 12-13 age group. On the Louisiana Junior Golf Tour, Guidry finished top 4 in all stroke play events he started in including his two wins at the Querbes Park Golf Course and the LJGT Tour Championship at Lake Charles. These two wins would help him come from behind and out dual Greene for the POY title.

It was an outstanding 2021 season for all three of our Junior Players of the Year and the future is bright for Sarah, Noah and Slayte.  Congratulations to these players!