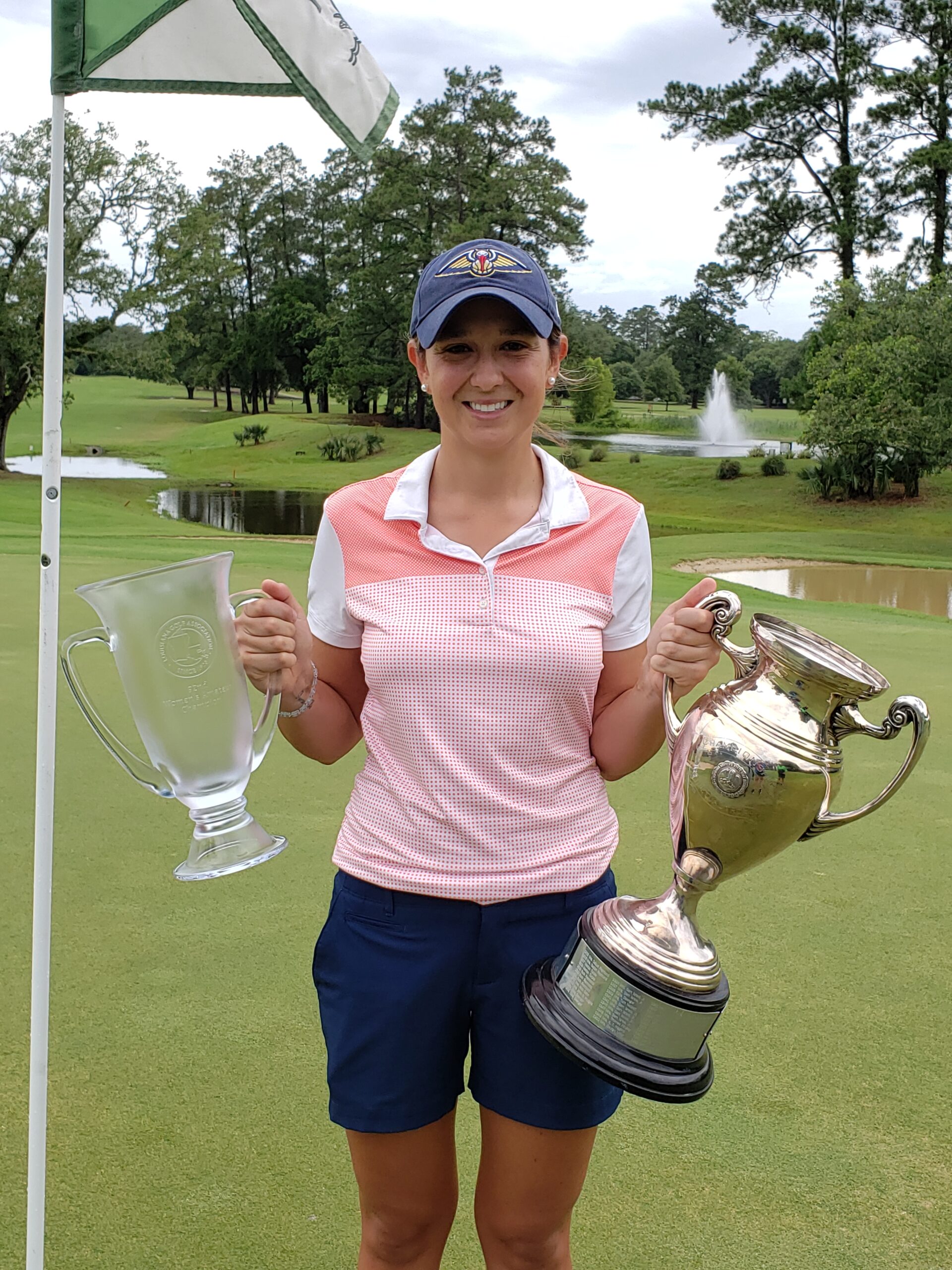 Lisa Bisset of New Orleans won the 92nd Louisiana Women’s Amateur Championship 1 up over Brooke Tyree of Sulphur at Tchefuncta Country Club on Wednesday. After shooting a six-over par 77 in stroke play qualifying and entering the match play bracket at the sixth seed, Bisset switched gears and never trailed in any of her four matches this week. She played a total of 67 holes in three days, and her 2020 Championship run included four birdies and forty-three pars. She was steady and unflappable all week. Both Bisset and Tyree showcased a tremendous amount of mental fortitude by competing in a six-and-a-half-hour final match through less than ideal scoring conditions. Mother Nature had cooperated all week, but Wednesday was a different story. Bisset and Tyree started the final match at 8:30 AM in a rain that never let up, and in the middle of their 15th hole, play was suspended for a dangerous situation (lightning) at 10:44 AM. The large weather system that moved across the Northshore on Wednesday dumped 1.8 inches of rain on the golf course. Following the relentless rain, play resumed at 2:24 PM and the two best amateur golfers in Louisiana were up for the challenge. The final match went 18 holes, and it was a memorable finish for Bisset who won her first Louisiana Women’s Amateur Championship.

Bisset won the 10th hole with a par, but Tyree bounced back to win the par 5 11th hole with a birdie. Holes 12, 13, and 14 were tied with all pars. Bisset found the right side of the fairway with her drive at the par 4 15th hole and hit her second shot just left of the green. Tyree missed the fairway with her drive and was in the rough below the pine trees close to the cart path. As Tyree was preparing for her approach shot, play was suspended. Both players made bogeys at the par 4 15th hole following the resumption of play, and Bisset remained one up. That’s when the competition ramped up.

Due to the flash flooding that hit the golf course, the Tournament Committee decided to play the three driest holes on the golf course to finish the Championship: The newly renovated par 4 3rd hole (351 yards) which has all new drainage and bunkers, the par 4 7th hole (380 yards), and the par 3 8th hole (175 yards).

Bisset and Tyree both found the fairway on the 7th hole, hit the green in regulation, and two-putted. Bisset was one-up with two holes to play. Tyree had still had the honor from winning the 11th hole, and she bombed her drive down the middle of the fairway. Bisset hit her drive down the left side of the fairway on top of the crown. She stuffed her approach shot to twelve feet behind the hole. Tyree’s approach shot landed on the green but twenty-five feet short of the hole. Tyree drained the uphill putt to put the pressure on Bisset, but Bisset once again rose to the challenge and made her birdie putt to remain one up. Tyree would go on to make bogey on the par 3 8th hole, and she conceded Bisset’s short bogey put to end the match. It was a treat to see the competitiveness of both ladies and they played at a high level when it mattered the most this week.

The Tchefuncta Country Club course drew rave reviews from competitors. Superintendent Toby Thornton and his crew worked tirelessly to get the golf course in championship condition, and Thornton even went above and beyond the call to pump bunkers on the revised final three holes of the match to ensure a quality finish. The course played to a par 71 at approximately 6,200 yards for the Championship.