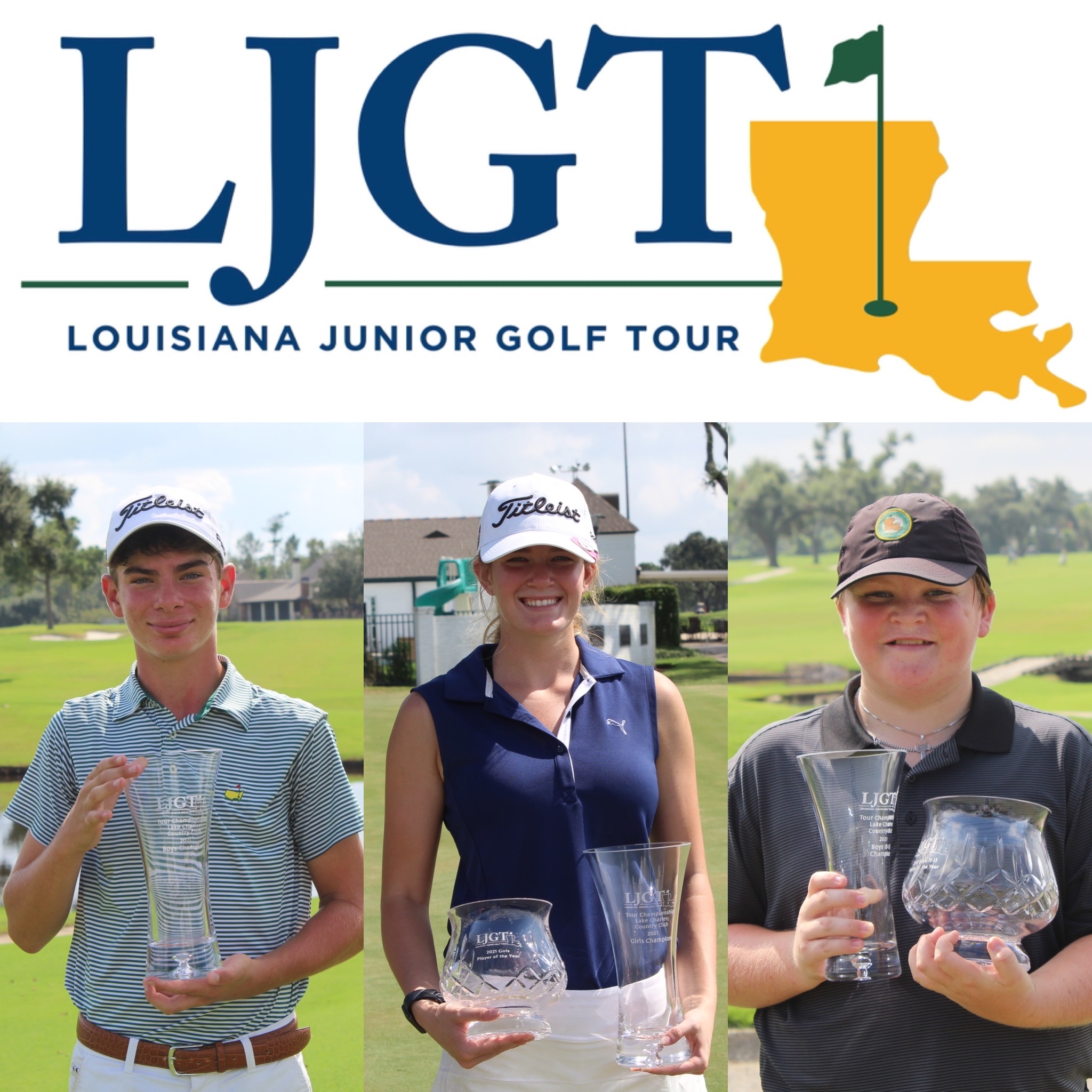 Ben Blanco of Broussard secures his second victory of the Louisiana Junior Golf Tour season in the final tour event, the LJGT Tour Championship, at Lake Charles Country Club. Blanco edged out Noah McWilliams of Benton in the Overall Boys division with a clutch eagle on 18 that give him the eventual 1-stroke advantage. Blanco’s clutch eagle on 18 polished off his final round 67 (the low round for tournament) that was highlighted by his 4-under stretch through his last four holes. Blanco’s rounds of 70 and 67 left him with the final mark of 7-under, 137 for the tournament in a closely contested race at the end. Noah McWilliams finishes his tournament with rounds of 69-69 for a 6-under, 138 giving him the solo second place finish. Finishing behind Blanco and McWilliams in third place was Collin Jones of Lake Charles with a 5-under tournament score. Jones takes third place honors after edging out the first round leader Lander East of Sulphur in a scorecard playoff.

Sarah Knight of Sterlington takes home her third win of the LJGT season with her championship in the Overall Girls’ division. Knight shot a 13-over par 157 for the tournament with rounds of 78 and 79 to hold off a competitive field. Coming in second place was Mattie Purgahn of Lake Charles behind the strength of her final round of 4-over 76. Purgahn’s final round of 76 was the low round for the Girl’s Division and powered her to the 14-over par 158 second place finish. Finishing behind Knight and Purgahn, Hannah Pitre of Prairieville takes home third place with rounds of 79 and 83 for an 18-over par 162. Sarah Knight also extends her streak of finishing top 4 in every LJGT Event she has started in this season.

Slayte Guidry of Logansport wins his second straight tournament in the Boys’ 11-13 Division with his 73-72, 145 1-over par performance in the tournament. Guidry’s even par 72 in the final round helped him come from behind to beat Hudson Greene of Bossier City down the stretch. Greene finishes with a 68-79, 147 3-over par mark for this tournament. Greene’s 4-under par 68 was the low round for the Boys 11-13 division. This is Slayte’s fourth straight Top-3 finish in the Boys’ 11-13 division this season.

The LJGT Tour Championship was held at Lake Charles Country Club and the players in the field battled wet conditions and rain throughout the tournament. The weather broke during the final round rounding the Final Round a hot and sunny 90 degree finish.