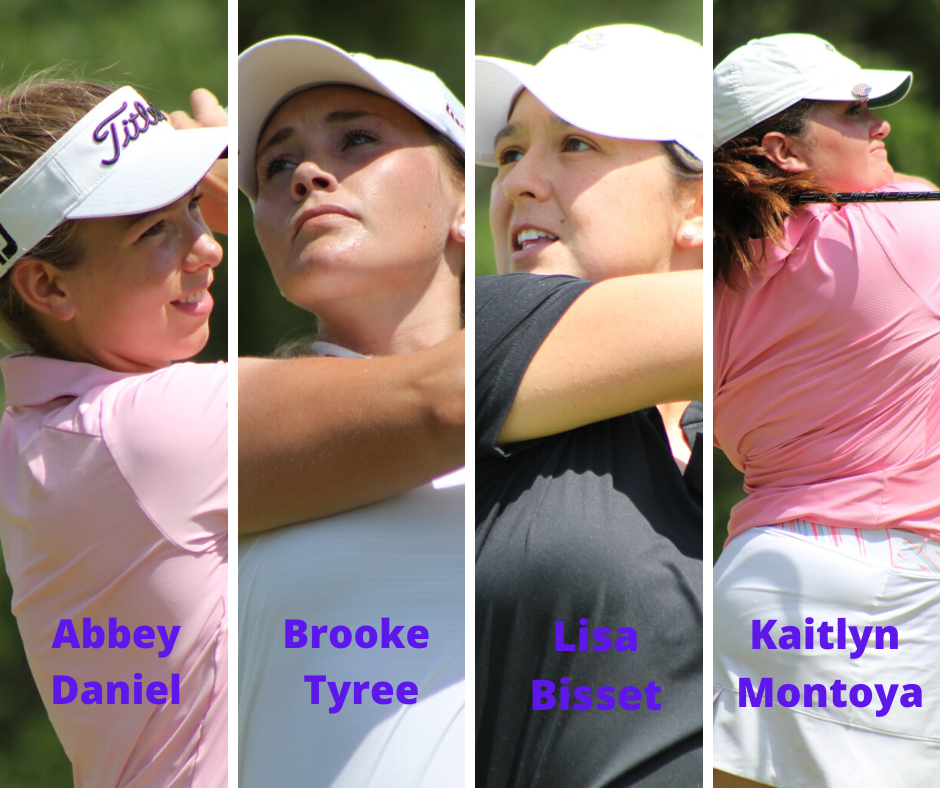 It was an epic twelve-hour day of golf at Tchefuncta Country Club. The best female amateur golfers in Louisiana battled it out over two rounds of match play. The first group of the day started at 8:00 AM and the last putt of the day dropped at 8:00 PM. Play was suspended for three hours due to inclement weather from 8:30—11:30 AM. Competitors showcased true grit and a special love for the game in the Round of 16 and Quarterfinal matches. At the end of the day, #1 seed Abbey Daniel of Covington, #5 seed Brooke Tyree of Sulphur, #6 seed Lisa Bisset of New Orleans, and #15 seed Kaitlyn Montoya of Shreveport advanced to the Semifinals. Daniel, the 2018 Louisiana Women’s Amateur Champion, will play Tyree starting at 8:00 AM, while Montoya and Bisset square off at 8:08 AM.

Daniel, a member at Tchefuncta CC, won her first match over Sophia Macias of Denham Springs, 7 & 6. Monica Dibildox of Baton Rouge took Daniel to the 17th hole in their Semifinal match, with Daniel winning 2 & 1.

Montoya may be the story of the championship thus far, pulling off the upset over defending Champion and #2 seed Alden Wallace of Shreveport in their Round of 16 match. Montoya, the 2019 Louisiana Junior Player of the Year and a University of Louisiana at Monroe commit, birdied the final two holes to win 2 up. She took care of business in the Quarterfinals as well, defeating Emma Smithers of New Orleans 3 & 1. Montoya finished that match with another birdie at the par 3 17th hole (140 yards).

Tyree, a rising Junior at Texas A & M University, cruised to a 5 & 4 victory over Blair McKenzie of Madisonville in the Round of 16. Tyree defeated Cassidy Lambert of Gretna 2 & 1 in the Quarterfinals, sealing the deal with a birdie on the 17th hole.

Lisa Bisset of New Orleans won her first match of the day 2 & 1 over 2004 Louisiana Women’s Amateur Champion Julie Harrison of Baton Rouge. Bisset is the Assistant Head Coach for the Tulane University Women’s Golf Team. She defeated Liza Lapeyre of New Orleans 4 & 2, finishing the match in style with a birdie at the par 4 16th hole.

Due to the impending inclement weather in the forecast for the Northshore this week, the Tournament Committee bumped Quarterfinal matches to Monday afternoon and all Flighted matches played two rounds. The stage is set for some incredible golf the next two days. Ten matches will be played Tuesday morning: Championship Flight Semifinals, Championship Consolation Semifinals, First, Second, and Third Flights Championship Finals and their respective consolation finals.

Catherine Favret of Covington won Fourth Flight 5 & 4 over Michelle Littlepage of Colfax. There are consolation brackets for Championship, First, Second, and Third Flights, with those consolation finals taking place on Tuesday and Wednesday (Championship only).

The Tchefuncta Country Club course was in excellent condition following the rain on Monday and it drew rave reviews from competitors. The course played to a par 71 at approximately 6,200 yards for the Championship and 5,300 yards for Flighted Championships.