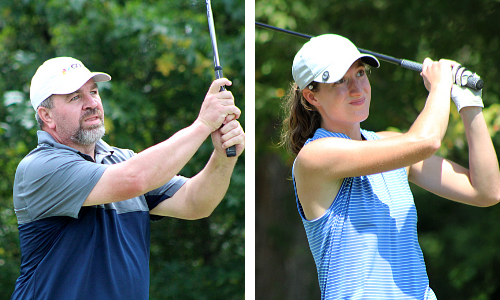 Catherine Hodson of Baton Rouge won her second consecutive Net Amateur Championship on Sunday after winning the 2019 Championship at English Turn Golf & Country Club. Hodson trailed by one stroke entering the final round and carded the low round of the Championship, a two-under par 70 to finish the tournament at even par 144. Amanda Rothrock and Dawn Watson of Baton Rouge finished in a tie for second place with a total of 151.

There were three flights in the Men’s Championship. Matthew Moss of Denham Springs was the winner of the St. Andrews flight over Kevin Schellhaas of Metairie. Asa Faulkner of Denham Springs defeated Paul Hinnenkamp of New Orleans by one stroke to win the Troon Flight. Resta Choate of Shreveport won the Carnoustie flight with a total of two-over par 146.

It was another beautiful day for golf in Denham Springs with temperatures rising to the low-90s. Greystone Golf & Country Club is in excellent condition and drew rave reviews from competitors.