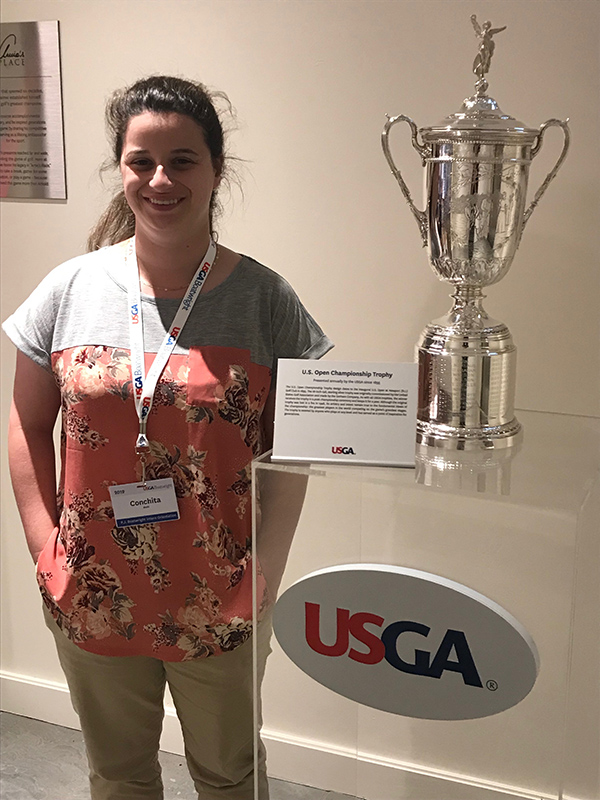 I had the wonderful opportunity of attending the P.J. Boatwright intern summit this year in Liberty Corner, New Jersey. The summit, which was held May 20-23, 2019, was sponsored by the USGA, and there were approximately 81 Boatwright interns from across the country attending. The summit included both teaching seminars and social activities. All the interns had a chance to learn about the USGA headquarters, attend golf industry seminars, and get to know each other over meals and a putting contest.

On Monday after everyone settled in and arrived we had a welcome party and dinner. We started with a tour of the USGA museum which included historic trophies and golf memorabilia from famous golfers. We enjoyed a nice buffet dinner after the tour. There were only about 15 female interns so we all got to know each other the first night. The leaders of the summit presented the next day’s agenda and told us to get to know and network with some of the USGA employees if we ran into them. We then headed back to the hotel.

On Tuesday we were all shuttled to the USGA headquarters and had breakfast together. We then went to the lecture hall and listened to 4 presentations on the game of golf. Next, we were split up into 4 teams and had a putting competition and rotated it throughout the day. We also went and visited Arnie’s place and took pictures and talked with other interns. We ended the day with a nice dinner then headed back to the hotel.

On Wednesday we had more presentations and then we split up into different groups to see the golf testing center. This is where they test ball flight for golf ball manufacturers and other testing equipment. We had presentations on resilience, coaching for high performance, and one about all the championships the USGA conducts each year. Later that afternoon we were taken outside to finish the putting competition. One of the other female interns, Chelsea Sedlar from New Hampshire, won the contest with a hole in one. There were food trucks and music playing which made for a fun atmosphere. At the end of the day we had one last presentation about prejudice and stereotypes in the workplace. The last night everyone got together at the hotel for the final evening.

I made a conscious effort to get to know just about everyone. The group of interns got along very well and we all added each other on social media to keep in touch. We still chat online just about every day about what tournaments we are putting on and share videos of each other’s days. We have been talking about getting together sometime in the future. I learned a great deal and especially enjoyed hearing from the employees who work at the USGA. Seeing the behind the scenes operations was really interesting. I am very impressed with the entire Boatwright intern summit. It is a wonderful opportunity for golf interns to get together, learn about USGA, and network.