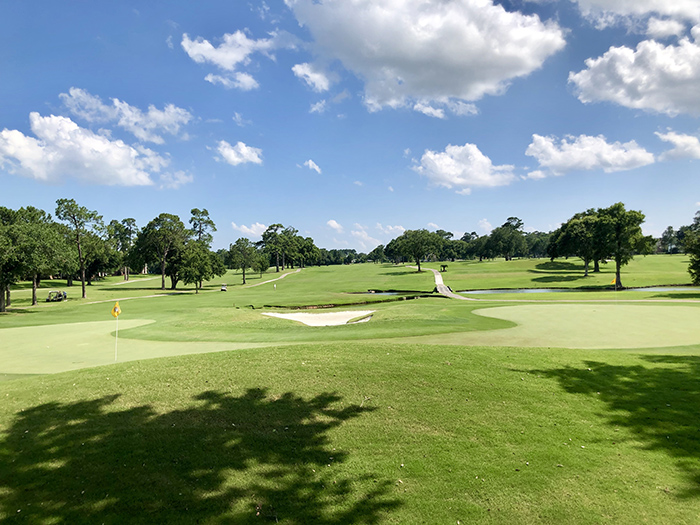 The thirty-sixth annual Louisiana Golf Association Four-Ball Championship kicks off Saturday at Lake Charles Country Club. 64 teams from across the state will compete for the prestigious title of best amateur Four-Ball team in Louisiana.  Phillip Frazier and Jay Sanders of Baton Rouge return to defend the title they won last year at The University Club, but they will have to fend off a stacked field in order to repeat as champions.

Also competing this year are 2011 LGA Four-Ball Champions Greg Berthelot of Baton Rouge and Kyle Williams of Choudrant.  Berthelot and Williams are coming into this event in great form, having made a deep run to the Round of 16 at the U.S. Amateur Four-Ball Championship at Bandon Dunes a few weeks ago.  2014 LGA Four-Ball Champions Darrell Lakvold of Baton Rouge and Blaine Patin of Greenwell Springs are seeking their second title.  Louisiana legend Tommy Brennan has teamed with his son Cooper for this event and they are a formidable duo. Brennan recently qualified for the 2019 U.S. Senior Open Championship, and he has great history at Lake Charles Country Club, having won the LGA Senior Amateur here in 2015.

The University of Louisiana at Lafayette products Triston Elston and Micah Goulas look to contend again this year after finishing tied for 8th last year.  Lake Charles Country Club members Billy Gabbert of Sulphur and 2018 LGA Mid-Amateur Champion Hank Shaheen of Dequincy will have a great opportunity to win this week and use their local course knowledge to their advantage.  Other local favorites include 2009 LGA Mid-Amateur Champion Matt Nicholas and his partner George Cestia and Lake Charles Country Club members Eric Brown and Hunter Crochet, the “young guns.”

Former Champions of the LGA Four-Ball include PGA Champion David Toms and PGA Tour winners Brian Bateman and Mike Heinen.  Toms won with Duane Lorio in 1986, Heinen with Mike Genovese in 1987, and Bateman with Bob Cooper in 1994.

This event will be a wonderful showcase of Lake Charles Country Club, which is celebrating its centennial year of golf.  Founded in 1905 on the same piece of property that it stands on today, Lake Charles Country Club is one of the oldest private clubs in the entire South.  Originally a yacht club, a golf course was constructed on club property in 1919, and play began shortly thereafter.  In just its third year, the club hosted the 1922 Louisiana State Amateur Championship.  A major renovation, completed in 2003, brought the course to its current level with state-of-the-art Tif Eagle greens and Tif Sport fairways.  Today, the club’s membership consists of avid—and—talented golfers.  As evidence, Lake Charles Country Club won back-to-back LGA Club Team Championships in 2016 and 2017.  This year, the best Amateur Four-Ball teams in Louisiana get to take their crack at the challenging and fun course.  The course has drawn rave reviews from the state’s best players and is expected to again be in excellent condition for this extremely strong field.