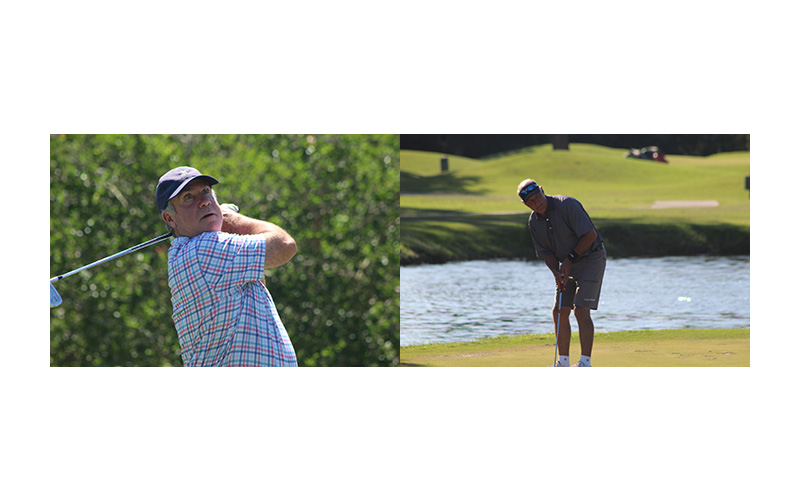 LeCompte’s Rod Baronet, who has won this Championship twice before, takes a one-shot lead over Robby McWilliams of Benton into final round play in the 32nd edition of the Louisiana Golf Association (LGA) Senior Amateur Championship at Oakbourne Country Club in Lafayette. Baronet, who won this Championship in 2011 at the University Club in Baton Rouge, and again in 2018 at his home course in Alexandria, OakWing Golf Club, shot a two-under par 70 on Friday and stands at even-par 144, setting up a final-round battle with McWilliams, who is again trying to defend the Championships he won in 2019 at Money Hill G & CC in Abita Springs and 2020 at Koasati Pines in Kinder. McWilliams fired the low round of the day to vault into second place by himself, leapfrogging 22 players with his four-under par round of 68 on Friday. He stands at one-over 145 after 36 holes. Baronet and McWilliams will both be attempting to join Todd Lusk of Baton Rouge as the only three-time winners of this Championship. Lusk won his titles in 1994, 1997, and 1998.

Baronet, who started his round on #10 Friday, began the day with birdies on three of his first four holes (#10, #11, & #13). He turned in one-under par 35 after a double-bogey on the difficult par-four 18th. A bogey on #2 and birdies on #5 & #7 produced another one-under 35 on the frontside and enabled him to finish one shot ahead of McWilliams after 36 holes.

Oakbourne’s own Robert Shelton of Lafayette took the top spot in the Super Senior division (for those 65 years of age and older) of this Championship, besting two other Oakbourne members, Doug Hobbs and Brad Mosing, who tied for the runner-up spot. Shelton finished at six-over par 150 to finish two shots ahead of Hobbs and Mosing, who both shot even-par 72 on Friday. The Super Senior division was conducted over 36 holes Thursday and Friday.

Saturday’s final group of Baronet, McWilliams, and Calloway will go off at 10:30 AM. The penultimate group at 10:21 will consist of Dornier, Lavespere, and D’Amico, with Brennan and Lauve joining Scott Haynie of Brusly in the third to last group at 10:12.

As mentioned, this year’s Championship is being held at Oakbourne Country Club in Lafayette, which played to a par of 72 at just under 6,600 yards on Friday. The course continues to draw accolades as it played firm and fast on another beautiful, sunny day. Oakbourne’s quick greens were challenging for this field of the top Senior players in Louisiana. Oakbourne Head Golf Professional Cliff Wagner and Course Superintendent Jason Barras and their respective staffs have been wonderful hosts for this LGA event.