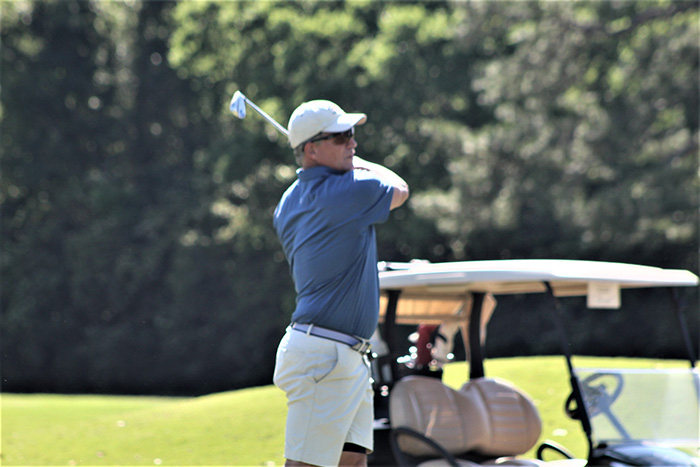 Eric Lavespere of Monroe, who finished as the runner-up in last year’s Championship, shot a two-under par 70 on Thursday to take the first-round lead in the 32nd Louisiana Senior Amateur Championship.  Lavespere, who finished in second place to Benton’s Robby McWilliams at Kinder’s Koasati Pines last year, began his round at 1:03 in the afternoon off #10, posting book-end nines of 35 with birdies on #13, #1, and #2.  His lone bogey came at the par-four 8th, his next to last hole of the day.  2015 Champion Tommy Brennan, playing in the morning wave, shot a one-under par 71, firing a two-under 34 on the front, then parring the first eight holes on the back before finishing with a bogey on the difficult par-four 18th to finish first round play in second place.  Alone in third at even-par 72 was Jeff Calloway of Baton Rouge.  Calloway had nines of 36-36, with three birdies, three pars, and three bogeys on each side.  Alexandria’s Lewis Lauve is in fourth place after shooting one-over par 73.  Rounding out the top nine at two-over par 74 were; 2011 and 2018 Champion Rod Baronet of Lecompte, Jeff D’Amico of Lafayette, Grady Brame of Hammond, Don Duet of Galliano, and Scott Haynie of Brusly.

Two-time defending champion Robby McWilliams (2019 at Money Hill G & CC, 2020 at Koasati Pines) of Benton shot a five-over par 77 on Thursday.  Thursday’s play was conducted under beautiful cloudless skies with just the hint of a breeze.  The Oakbourne venue is drawing rave reviews from this field of the top Senior (50 years of age or older) players in Louisiana.  The course played to a par of 72 at just under 6,600 yards on Thursday.

The LGA is also conducting a Super Senior Championship (Ages 65+) the first two days over 36 holes.  Oakbourne member Robert Shelton leads the Super Senior division after first round play with a one-under par 71.  Keith Kline from Mandeville is at two-over par 74, with 2009 and 2012 Senior Champion Doug Farr of Monroe rounding out the top three at three-over 75.  Bruce Gilcrease of Denham Springs hit the shot of the day, hitting a pitching wedge exactly 112 yards to ace the par three ninth hole. Presentations for the Super Senior Championship will take place after play is completed on Friday.