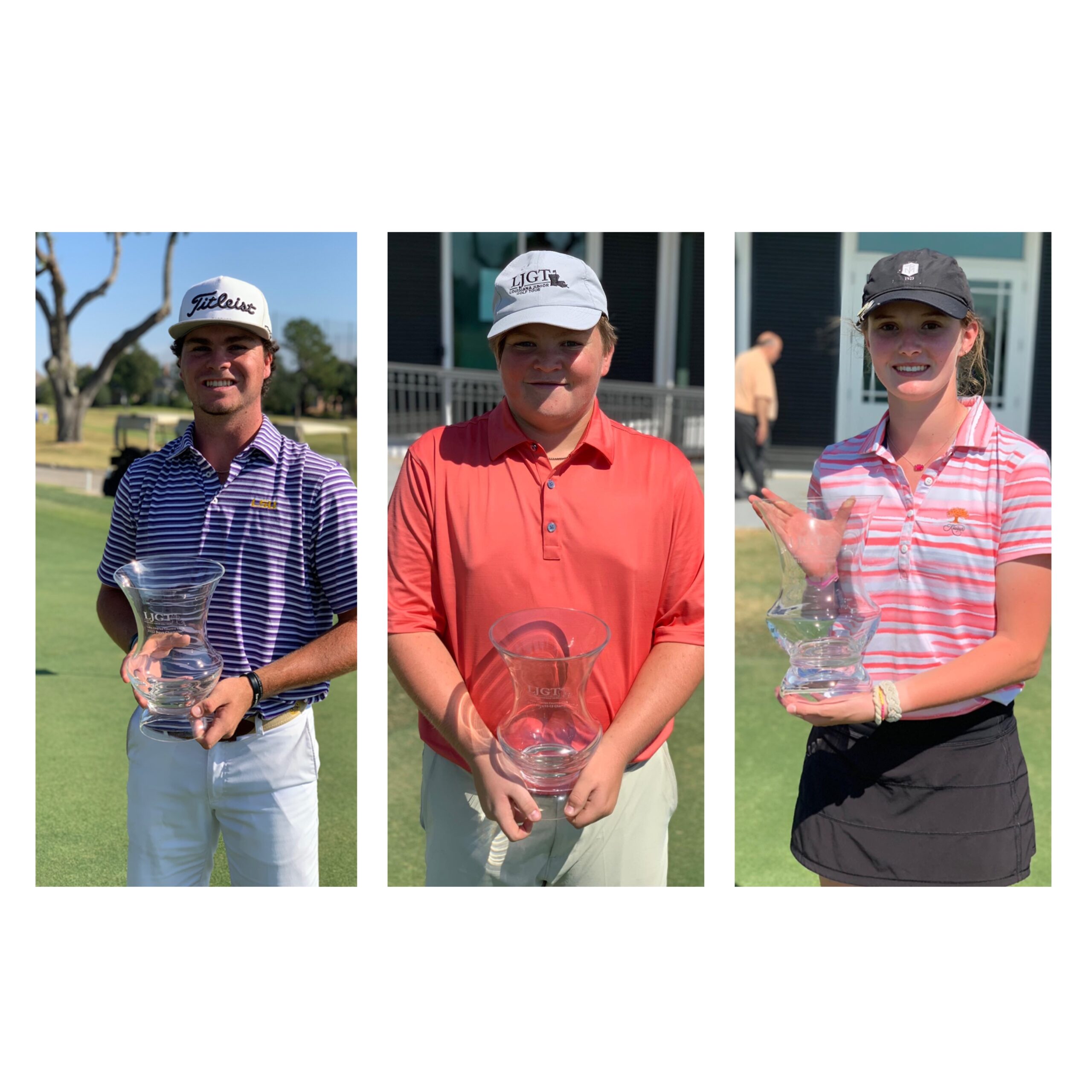 It was an incredible weekend at Lake Charles Country Club for the season finale of the 2022 Louisiana Junior Golf Tour (LJGT). The golf course was immaculate, the weather was perfect, and the best and brightest junior golfers in Louisiana competed in the Tour Championship to determine who would win Player of the Year honors in a wonderful celebration of the promising future of golf in our state. LSU commit Noah McWilliams of Benton took home the boys’ Tour Championship title in a sweet redemptive victory, having lost the 2021 Tour Championship by one stroke. McWilliams fired the low round of the championship on Sunday, and his final round 68 included six birdies and two bogeys. He made the turn in a blistering 31, after making birdies on holes 1,4,5,7, and 9. He made bogeys on holes 10 and 15 and then added a final birdie at the par 4 17th hole to shoot 68. He finished the Tour Championship at four-under par 140, the only player under par this weekend. This crowning achievement was the icing on the cake for McWilliams who cruised to win Louisiana Junior Player of the Year again this season (official POY announcements and full stories coming later next week). Landen East of Sulphur shot rounds of 74-71 to finish in 2nd place, five shots behind McWilliams. Ross Anderson of Lake Charles and Carter Schmitt of Baton Rouge tied for 3rd place at two-over par 146. Teagan Connors of New Orleans carded rounds of 78-77 (155) to win the Girls’ LJGT Tour Championship by three strokes over Samantha Schultz of Mandeville. Connors made four birdies over the course of 36 holes en route to her first LJGT victory. This should be a huge boost of confidence for the class of 2025 player as she goes into next season.

The 11-13 boys’ division needed extra holes to determine a champion. Noah Chauvin of Broussard, Hudson Greene of Bossier City, and Slayte Guidry of Logansport all finished the Tour Championship at even par 144 through 36 holes. Adding to the drama was the fact that they were also the top 3 in the Player of the Year points in the 11-13 division coming into the Tour Championship. On the first playoff hole, the par 5 1st hole, Greene and Guidry advanced with birdies, while Chauvin was eliminated after making par. Greene and Guidry both had opportunities to make a birdie on holes 2 and 3 but would settle for pars to extend the playoff. At the par 4 4th hole, Greene’s tee shot found the rough left of the fairway and he was unable to hit the green on his approach and couldn’t get up-and-down. Guidry made a routine par to clinch the victory. However, Greene’s runner-up finish was enough to win the 11-13 Louisiana Junior Player of the Year. He started the Tour Championship with 510 points and held a 20-point lead over Chauvin and an 80-point lead over Guidry. Guidry and Chauvin finished tied for 2nd in the POY race and just 20 points behind Greene.