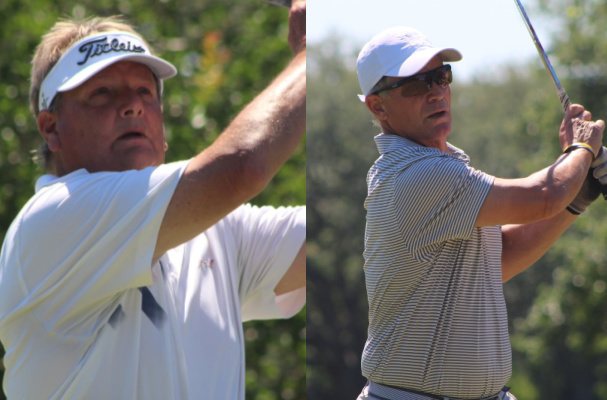 Bill Land of Lafayette and Eric Lavespere of Monroe won the 35th Louisiana Senior Four-Ball Championship at English Turn Golf & Country Club. Land and Lavespere fired the lowest round of the day on Sunday with a 6 under par 66 to go with their opening round of 68 to finish at 10 under par. Land and Lavespere were the leaders in the clubhouse with four groups left to finish before heavy rain forced a stoppage of play due to unplayable conditions. After close to an hour delay, play resumed at 5:58PM with the final group on the 15th green. Chad Braud and Dennis Brown of Gonzales were tied at the top of the leaderboard at 10 under par for the Championship along with Rod Baronet of Lecompte and Robby McWilliams of Benton when play resumed. Unfortunately, Braud and Brown both bogeyed their final hole of the Championship to finish at 9 under par. Baronet and McWilliams both bogeyed the par 3 17th hole and were unable to make birdie on 18 to finish at 9 under par. Jeff Calloway and Wendell Akins of Baton Rouge were tied for first place after round one and were in the final group on Sunday. As the sun was setting late Sunday evening, Calloway and Akins needed an eagle on 18 to reach 10 under par. From around 150 yards, Akins hit an incredible shot to 12 feet left of the hole and made the birdie putt to finish in a three-way tie for second place.

The LGA also conducted a Super Senior division Championship for those competitors 65 years of age and older.  In that Championship Gayle Sanchez and Jim Adams of Baton Rouge (12 under par 132) won the Championship by three strokes over Ben Thibeaux and Robert Shelton of Lafayette and Craig Simpson of Slidell and Darrell Benoit of Lafayette.