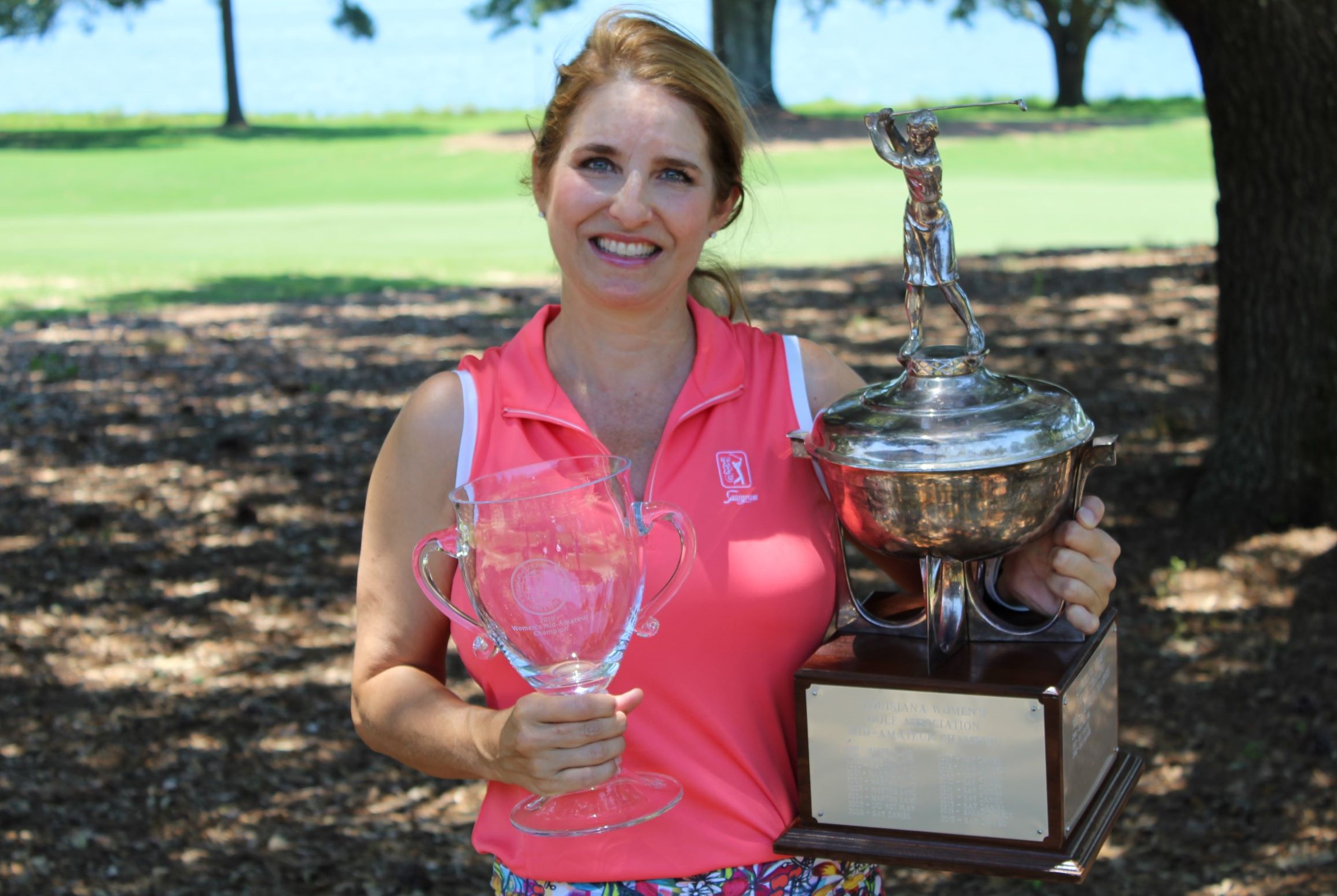 Kay Daniel of Covington captured her fifth straight Women’s Mid-Amateur Championship at Money Hill Golf & Country Club on Friday. Daniel took a seven-shot lead into the Final Round and fired a one-under par 71 en route to a fourteen-stroke wire-to-wire victory. She got off to a fast start with a birdie at the reachable par 5 1st hole. Her lone bogey came at the 316-yard par 4 6th hole, and she made the turn at even-par 36. Daniel carded another birdie at the par 4 12th hole and strung together six straight pars to finish. Daniel’s 71 was the only score under par in the Women’s Mid-Amateur, and coupled with her first round 76, she finished at three-over par 147 for the championship.

Runner-up in this year’s Championship Jane Rosen of Metairie bounced back from an opening 83 with a solid round of 78, which included two birdies on the 7th and 10th holes. Rosen finished the championship fourteen shots off the lead at seventeen-over par 161. Hannah Schorr of Lafayette finished solo third in her first appearance at an LGA Championship. Schorr bested her first round by two shots shooting a nine-over par 81, that featured three birdies on holes 4, 12, and 16. She finished just three shots back of second place at twenty-over par 164.

This year’s Mid-Amateur Championship also included two flights, in addition to the Overall competition. Player’s were flighted according to their handicap indexes using the May 1 handicap revision. In the First Flight, Chris Stoute of Westlake took home Champion honors with a 94-85-179 two-day total. Mary Capouch of Mandeville was the First Flight runner-up shooting a 94-88-182 two-day total. In the Second Flight, Money Hill’s own Becky Bordelon and Nancy Conravey finished Champion and Runner-up respectively. Bordelon shot a 91-93-184 two-day total, while Conravey finished with a 97-92-189 two-day total.

The skies were clear and the breeze was slight on this beautiful 80-degree day in May. The Ron Garl designed Money Hill Golf & Country Club Track played to a par 72 at approximately 5,443 yards for this competition. The golf course challenged the golfers in the Final Round. The greens were firm and fast, and the rough was thick, making fairways a premium. The LGA’s next Women’s Championship will be the 91st edition of the Louisiana Women’s Amateur Championship at The Country Club of Louisiana in Baton Rouge, LA, June 23-26. The 2020 LGA Women’s Mid-Amateur Championship will be conducted at Kosasti Pines at the Coushatta Casino Resort in Kinder.