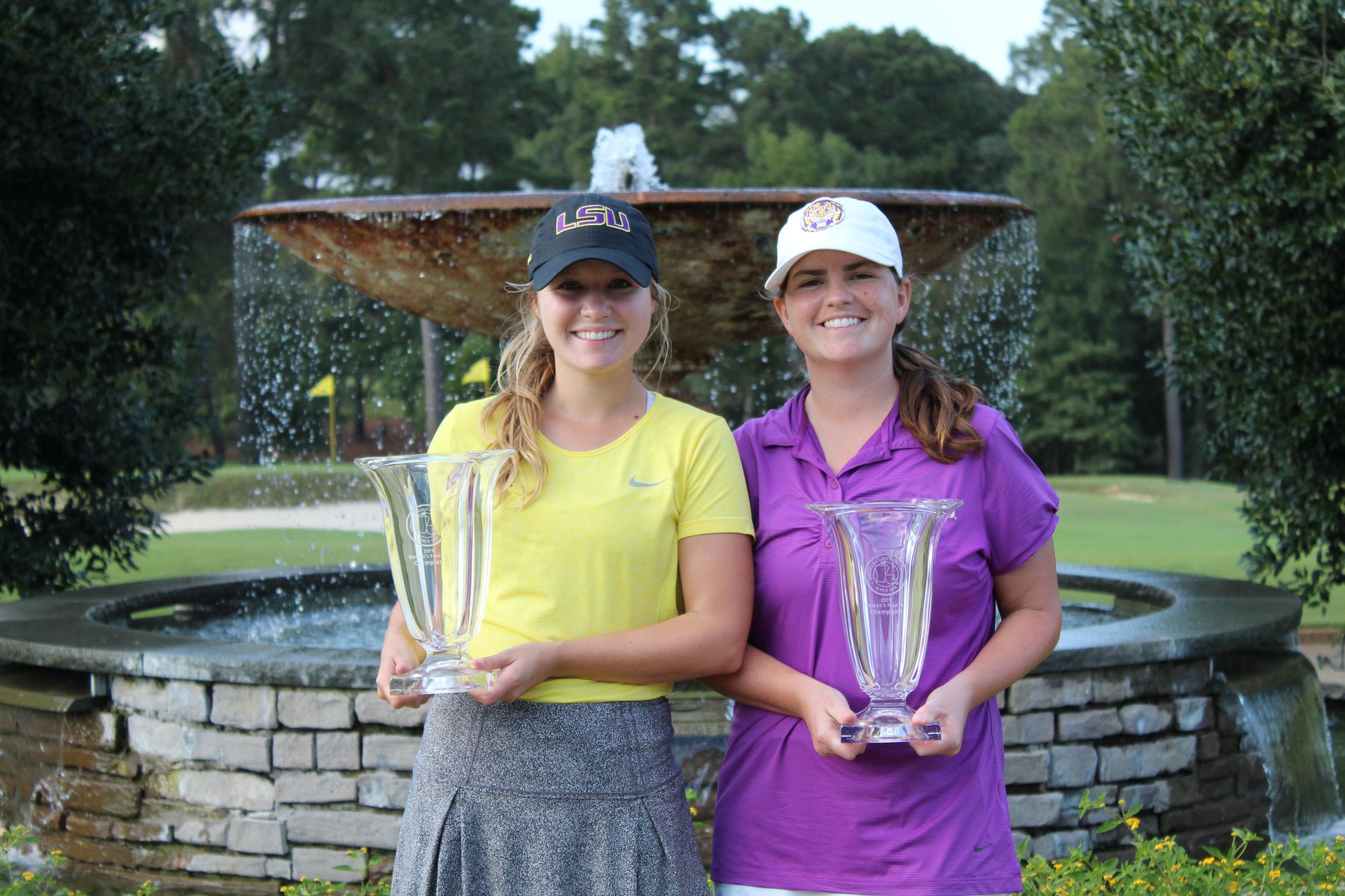 Kathleen Gallagher of Baton Rouge and Lana Hodge of Monroe fired an incredible seven-under par 65 on Wednesday at Squire Creek Country Club to capture victory at the 2019 LGA Women’s Four-Ball. The former LSU Women’s Golf teammates won by five strokes over runners-up Sarah Davison of Choudrant and Ashley Tonore of Monroe. Gallagher got the side going with a birdie at the par 4 1st hole. Following three consecutive pars, Hodge contributed a birdie at the par 3 5th hole. Their only bogey of the entire championship came at the par 4 6th hole. That was the only blemish on a near perfect day. Gallagher and Hodge righted the ship with a par, birdie, birdie finish to close out their front nine, and the duo made the turn at 3-under par 33.Gallagher and Hodge each contributed two birdies on their back nine to get to seven-under par on the day. Coupled with their first round 67, Gallagher and Hodge’s final round 65 brought them to twelve-under par 132 for the Championship.

Tonore and Davison fired a final round 68 to finish seven-under par 137 for the championship. The only other under par score on Wednesday was carded by third place overall finishers, Marge Richters of Monroe and Becky Meaux of Lake Charles (71).

The LGA also conducted a Net Division in its Women’s Four-Ball Championship in which all teams were pre-flighted based upon the October 1, 2019 GHIN Handicap revision. Per the USGA recommendations for players in a four-ball stroke play competition, course handicaps were adjusted to a 95% handicap allowance. Michelle Larson of Baton Rouge and Pam Moore of Monroe were victorious in First Flight after firing 67-65 12-under par 132. Larson had the co-shot of the day along Debbie Magee of Bossier City. Larson holed out from 129 yards with a 9 iron on the par 4 7th hole. Magee found the bottom of the hole from 111 yards with an 8 iron on the par 4 8th hole. Penny Autenrieth of New Orleans and Connie Bousquet of Mandeville finished Runners-up at five-under par 139.

Other Flight results include:

It was a picture-perfect day in Choudrant, with temperatures reaching the upper 70s. The Tom Fazio designed Squire Creek Country Club, which hosted the LGA Mid-Amateur in August, was in excellent condition for this championship. The golf course drew rave reviews from competitors. The pre-eminent Squire Creek Country Club played to a par of 72 at approximately 5,281 yards on Wednesday with a course and slope rating of 71.1/128. The greens were pure and smooth. Next year’s Championship with be conducted at Atchafalaya GC in Patterson on April 18th-19th.