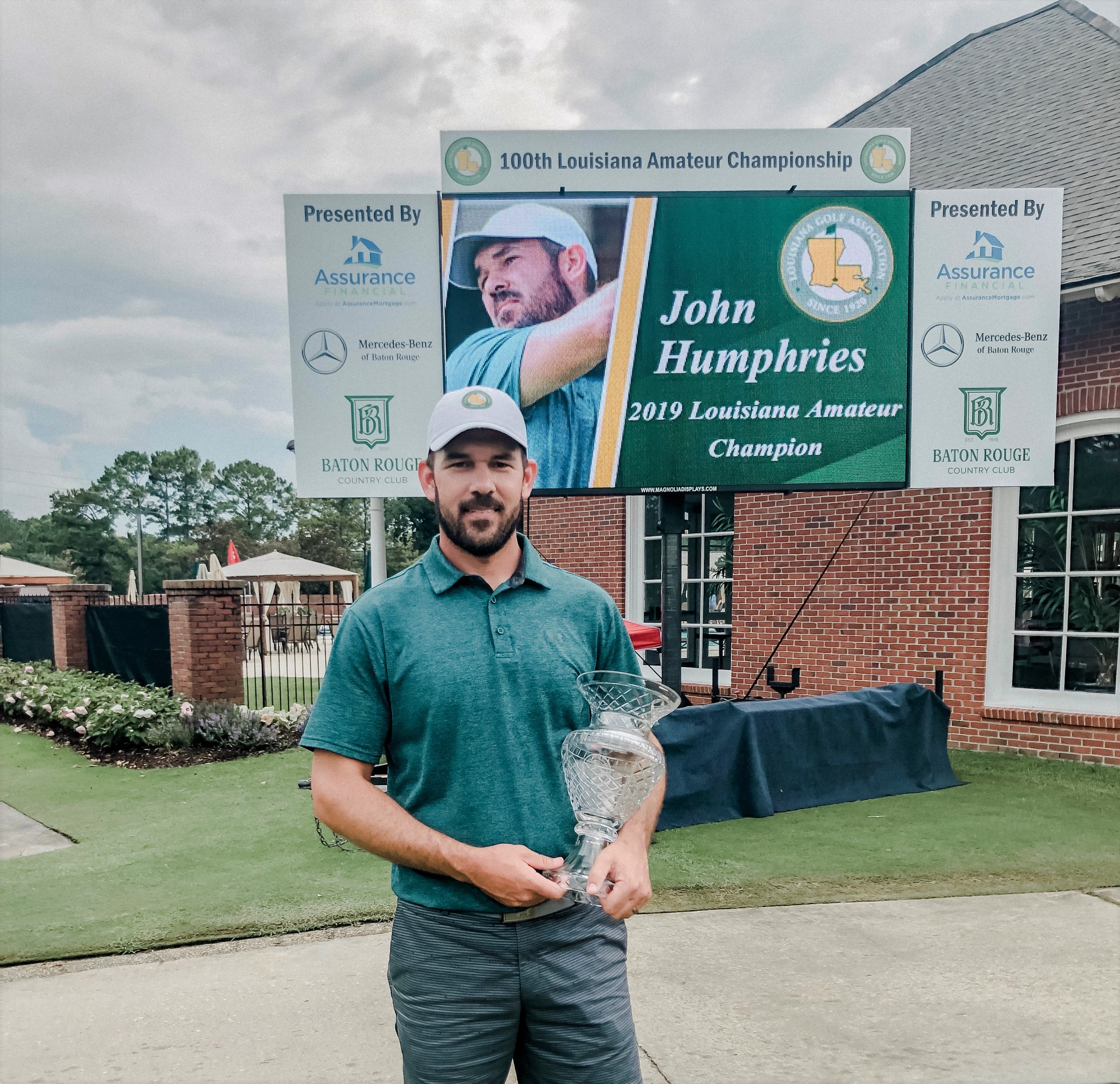 John Humphries of Woodworth fired a final round 71 on Sunday at Baton Rouge Country Club to win the 100th Louisiana Amateur Championship by two strokes over Gage Primeaux of Lake Charles. Humphries was unflappable all week, carding rounds of 69-66-74-71 to finish the Championship at eight-under par 280. He captured the lead on Friday after his stellar 66, the low round of the championship, and he would never trail again. “It’s exciting, and it’s a big relief,” said Humphries. “It was a stressful day today, and I had to really hit a lot of good shots just to keep it going… It’s awesome. They (the LGA) do such a great job to keep golf going. You work all year and you circle this event on your calendar and it’s something to look forward to and practice and prepare for. It’s a vital part of golf.” Humphries echoed the sentiments of other competitors when asked about his experience at Baton Rouge Country Club. “This was first class all the way around. I’ve played golf all over the world and these were the best greens I’ve ever been on. They were perfect all day, every day.” Humphries also won the LGA Amateur Championship in 2003 at Southern Trace Country Club. The 16 years between victories is the longest duration between victories in the history of this championship. Humphries becomes the eleventh player all-time to win multiple Louisiana Amateur Championships.

Humphries’ final round 71 included three birdies and two bogeys. He started with back-to-back pars and then made a birdie at the par 3 3rd hole (118 yards). Following three consecutive pars, Humphries made his second birdie of the day at the par 4 7th hole (356 yards). He added another par at the par 3 8th hole (181 yards). Humphries bogeyed the par 5 9th hole (534 yards) and made the turn at one-under par 35. Humphries made a par at the par 4 10th hole and then he birdied the par 4 11th hole (384 yards). Before he could tee off on the 12th hole, play was suspended due to a dangerous situation (lightning) at 1:08 PM. Play resumed at 3:30 PM and Humphries made back-to-back pars on holes #13 and #14. His second bogey of the day came at the challenging par 3 14th hole (222 yards). Humphries finished his round in impressive fashion with four consecutive pars down the home stretch.

There were only six competitors to finish under par for the championship. Rounding out the top 4 are: 3.) Reigning LGA Junior Amateur Champion Nicholas Arcement of Thibodaux (286), T4.) Brandt Garon of Jackson (287), T4.) Carter Toms of Shreveport (287), T4.) Jonathan Bale of Baton Rouge (287).

This marked the sixth time that Baton Rouge Country Club, which was founded in 1916, has hosted the Louisiana Amateur Championship. The historic venue also hosted this Championship in 1923, 1942, 1949, 1953, 1968 previously. The golf course drew rave reviews from this field of the top amateur players in Louisiana. The tree lined shot makers course played to a par of 72 at approximately 6,990 yards on Sunday. Baton Rouge County Club was in perfect condition for this prestigious championship.  The greens were pure and rolled incredibly smooth.

Next year’s Championship will be conducted June 11-14 at Rees Jones designed Bayou Oaks at City Park (South Course). The low 40 finishers and ties are exempt into next year’s event.