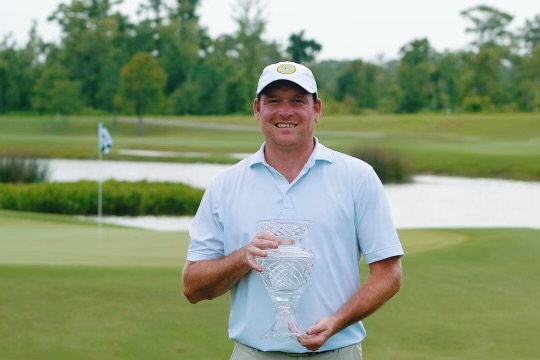 Berthelot had an eventful journey to the top of the leaderboard over 72 holes. He teed off in the morning wave Thursday and was able to complete his first round, along with the rest of the field. That was the only day of the championship that play was not suspended due to a dangerous situation and inclement weather. Berthelot and the afternoon group of players did not hit a shot on Friday, but the other half of the field completed their second round late in the evening. Therefore, Berthelot started his second round at 8:12 AM on Saturday and shot a bogey free three-under par 69. The field was cut to the low 60 scorers and ties following 36 holes and players were repaired for Saturday afternoon’s third round. Berthelot was one-under par through eight holes in his third round when play was suspended Saturday at 4:57 PM. At that time, he was five-under par for the championship and tied for second, two shots behind Andrew Noto of Luling.

After playing 26 holes on Saturday, Berthelot had the daunting task of playing 28 holes on Sunday in another heat advisory. Play resumed at 7:04 AM on Sunday, and Berthelot proceeded to make eight straight pars. He finished his third round in style with back-to-back birdies on holes 17 and 18 to get to seven-under par for the championship through 54 holes. Berthelot was tied for the lead with Flynn who fired a 65 in the third round.

Berthelot, Flynn, and 2012 Amateur Champion Patrick Christovich were in the final pairing and started their final round at noon on Sunday. Berthelot, no stranger to being in contention on Sundays, was steady and made par at the 1st and 2nd holes. He added his first birdie of the final round at the par 3 3rd hole (180 yards). His tee shot at the 4th hole found the penalty area to the right of the fairway, which led to a bogey. After back-to-back pars on holes 5 and 6, Berthelot seized the momentum with an incredible eagle at the par 5 7th hole (561 yards). After finding the fairway with his drive, Berthelot smashed a 4-iron 257 yards and the ball 25 feet from the hole. He drained the putt and took the lead after Flynn three-putted for par. Berthelot would never relinquish the lead. He made par on holes 8-16 and then stumbled at the 17th hole with a three-putt bogey. His lead was down to one shot when he stepped on the 18th tee, but he took care of business and methodically made a birdie to finish his stellar championship. Berthelot becomes the twelfth player all-time to win multiple Louisiana Amateur Championships.

Ryan Fulton of Crowley finished in 3rd place (284). Others finishing under par for the championship were:

The Pete Dye designed TPC Louisiana course played to a par 72 at approximately 7,073 yards on Sunday. Superintendent Tyler McCool and his crew had the golf course in immaculate condition. The entire TPC Louisiana staff went above and beyond to make the players and guests feel welcome and the hospitality was first class. The 104th Louisiana Amateur Championship will be conducted at the newly renovated Southern Trace Country Club in Shreveport, July 20-23, 2023. The low 30 and ties are exempt from qualifying.