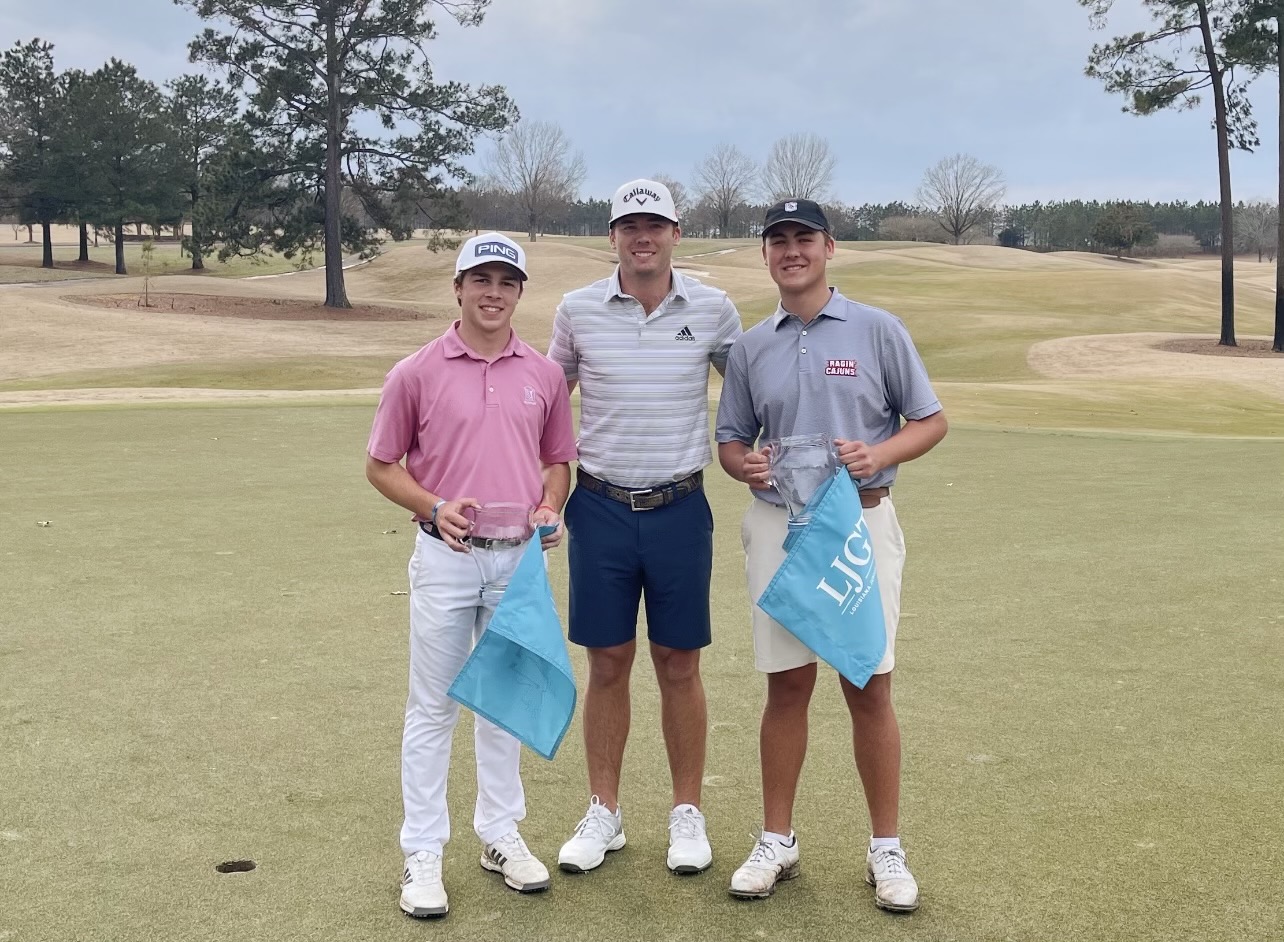 For the third consecutive year a playoff has decided the Champions of the Sam Burns Junior Four-Ball at Squire Creek Country Club in Choudrant, Louisiana. Eli Ortego of Broussard, Louisiana and Jay Mendell of Lafayette, Louisiana bested Luke Haskew of Baton Rouge, Louisiana and Holden Webb of Shreveport, Louisiana, after both teams finished at 10-under par 134. The playoff started on the par four 18th hole playing at 425 yards. All players made solid pars on the first playoff hole. On the second go around at the 18th hole, Webb hit the green, about 10 feet left of the hole, leaving himself a tricky birdie putt. Haskew’s approach shot ended hole high but just off the fringe in the left rough. Mendell also hit the green and left himself a 15-foot uphill birdie putt. Ortego was last to hit hit into the green, and he was playing from 118 yards out after he bombed his drive 307 yards just inside the right rough. Ortego hit his wedge shot two feet from the hole, ensuring that a birdie would be needed from Haskew and Webb if they wanted the playoff to continue. Haskew was first to play and nearly holed his chip shot, and then tapped in for par. Mendell, never one to shy away from a pressure situation, did not give Ortego an opportunity to tap in his birdie because he drained his own birdie putt and the momentum shifted in favor of the duo from South Louisiana. Webb’s putt to extend the playoff missed over the right edge, and Ortego and Mendell won in dramatic fashion. Four Ohio State University Men’s Golf commits competed this year and their two teams respectively tied for third place at eight-under par 136: Jacob Tarkany of Scottsdale, Arizona / Joe Wilson IV of West Chester, Ohio and Jack Vojtko of Stow, Ohio / Topher Reed of Fairview Park, Ohio.

Sarah Knight of Sterlington, Louisiana and Sarah Meral of Abita Springs, Louisiana won the Overall Girls’ Championship after shooting a Championship low round of one-under par 71 for a two day total of even par 144. Mattie Purgahn of Lake Charles, Louisiana and Montana Dileo of Orange, Texas finished runner-up at 148. Calynne Rosholt of Cave Creek, Arizona and Chloe Tarkany of Scottsdale, Arizona rounded out the top three with a score of 149.

John Markow of Ridgeland, Mississippi and Tucker Gutierrez of Madison, Mississippi captured the Boys’ 11-13 division by shooting rounds of one-under par 71 and even-par 72 for a 143 total. One stroke behind was the side of Hudson Partin of Denham Springs, Louisiana and Logan Heltz of Abita Springs, Louisiana. Jack Gilmer and James Holtsclaw of Shreveport, Louisiana finished in third place with a total of five-over par 149.

It was a windy day in Choudrant, with temperatures reaching the low 70s. The Tom Fazio designed Squire Creek Country Club drew rave reviews from competitors and spectators. The Squire Creek course played to a par of 72 at approximately 6,625 yards on Sunday for the Overall Boys competition and 5,450 yards for the Girls and 11-13 Boys. The greens are pure and even though the course has received a lot of rain this winter, it is in excellent condition.