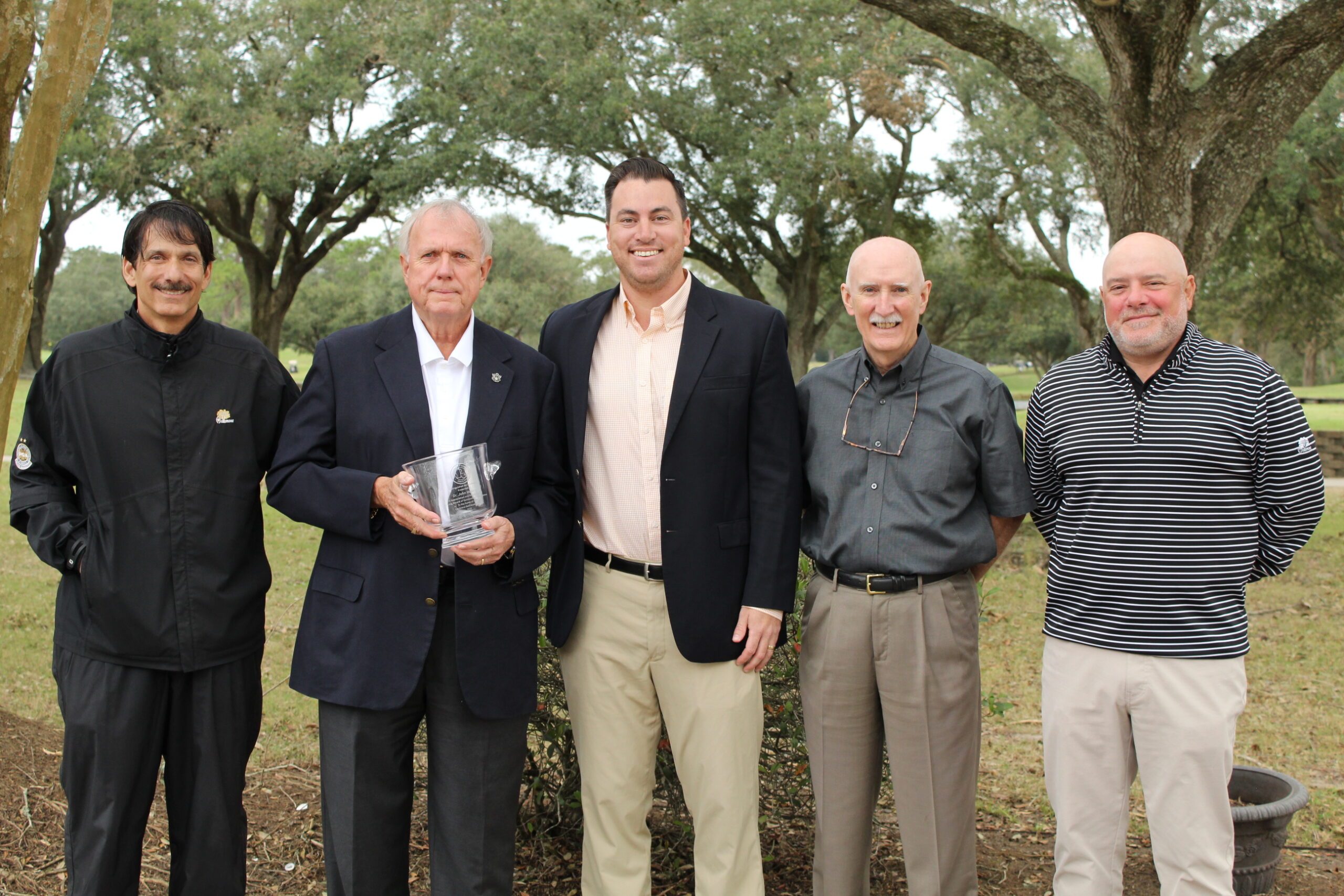 The following article was written by Dan McDondald for his Making the Turn column for Wednesday, Oct. 21

Normally, the Louisiana Golf Association’s Distinguished Service Award is presented at a banquet during the organization’s Mid-Amateur Championship.

Due to COVID-19 restrictions that banquet couldn’t happen earlier this year, and the Mid-Amateur scheduled at Le Triomphe had to be cancelled amid the pandemic. For some, that might have lessened the impact and the meaning of the LGA’s most prestigious honor.

Not for John Hendry.

After nearly four decades of involvement in and service to multiple levels of golf, Hendry received the award last Friday at a table in Oakbourne Country Club’s dining room, surrounded by four friends who are all intimately involved in the game.

And that quiet, casual ceremony was just fine with Hendry.

Logan Ray, executive director of the LGA, made the presentation at a table that included Cliff Wagner, PGA head professional at Oakbourne; Carr McCalla, long-time LGA executive director and the 2018 recipient of the DSA; and Jeff D’Amico, the LGA’s Vice-President also representing the Oakbourne Board of Directors that Hendry served on for seven years.

“I could have given a speech if I’d had to,” Hendry said, “but the award is so significant from the standpoint of the people that are giving it to you. It wouldn’t have mattered if it had just been Logan and me. It’s always nice to be recognized, but to have the people there that it means so much to, the ones that you work with, that is what makes it such an honor.”

“He’s such a very humble guy,” Ray said, “but back when I told him about the award, and in our group at the presentation, you could tell how much it meant to him. It’s unfortunate that COVID made us do it the way we did, but it was my honor to present it to him. Nobody from here has ever done more for the game.”

That gathering table would have been much larger if it had included even one representative from all the areas and levels of golf where Hendry has been involved. It says volumes that he is now one of only two Louisianians to receive the LGA’s Distinguished Service Award, the Gulf States PGA’s Barbato-Thomas Award for service to golf, and the USGA’s Ike Grainger Award for a lifetime of service to the USGA and the game.

Those groups span both amateur and professional golf, as well as junior golf that remains Hendry’s passion.

“What that says to me is that golf’s a great game,” he said. “An eight-year-old can play with an 80-year-old, an ‘A’ golfer can play with a ‘D’ golfer. You can’t do that in other sports.

“There are so many levels … there’s the everyday golfer that plays on the weekends, there’s the amateur tournaments, there’s the professionals on all levels, the majors. Golf functions at a lot of different levels, and I’ve had the opportunity to work at every level.”

Hendry served in different capacities for the Chitimacha Louisiana Open, including as president for nine years, and helped formulate what is now Acadiana’s premier professional sports event and an established part of the PGA Tour’s Korn Ferry Tour.

During that time he boosted that tournament’s charitable giving and its involvement with youth golf, and he continued that youth work as part of the USGA’s junior championship committee for the past 26 years. During that time, he also served on the LGA’s board of directors for eight years, and founded and continues to chair the Louisiana Golf Foundation that provides support for the LGA’s Junior Golf Tour.

“The values of golf are so important for kids to learn,” he said. “That’s why I always gravitated to junior golf. Even with the professionals and the pro tournaments, it’s the connections with the kids that make them special.”

The Distinguished Service Award’s past recipients run the gamut of golf involvement – from players who excelled on the pro level, players who won dozens of amateur events, club professionals to promote the game on a daily basis and some whose work on the grass-roots level has improved golf for everyone else. It’s not an award for those involved only with the LGA … far from that.

“This award honors individuals who have bettered the game,” Ray said. “The previous winners are an amazing group, and Dr. Hendry’s in great company. He betters the game in a lot of ways that are behind the scenes, without recognition, so for us to be able to recognize him was very special.”

“The hardest part for me was that when you get an award of that nature, you realize you didn’t do everything,” Hendry said. “Where’s Jimmy McCartney, Ronnie Gaspard, Valerie Cox, Herb Schilling, so many others and some who aren’t with us any more. Those are the ones who should have been on that stage with you, because you couldn’t have done all those things without those people, the ones who went before you and the ones who have your back.

“We all got a lot of stuff done together. There’s no one individual that could do that. I was sort of the spokesman a lot of times, and maybe there was one guy stirring the pot, but kind of like a good gumbo a lot of ingredients were always in there to make it work.”