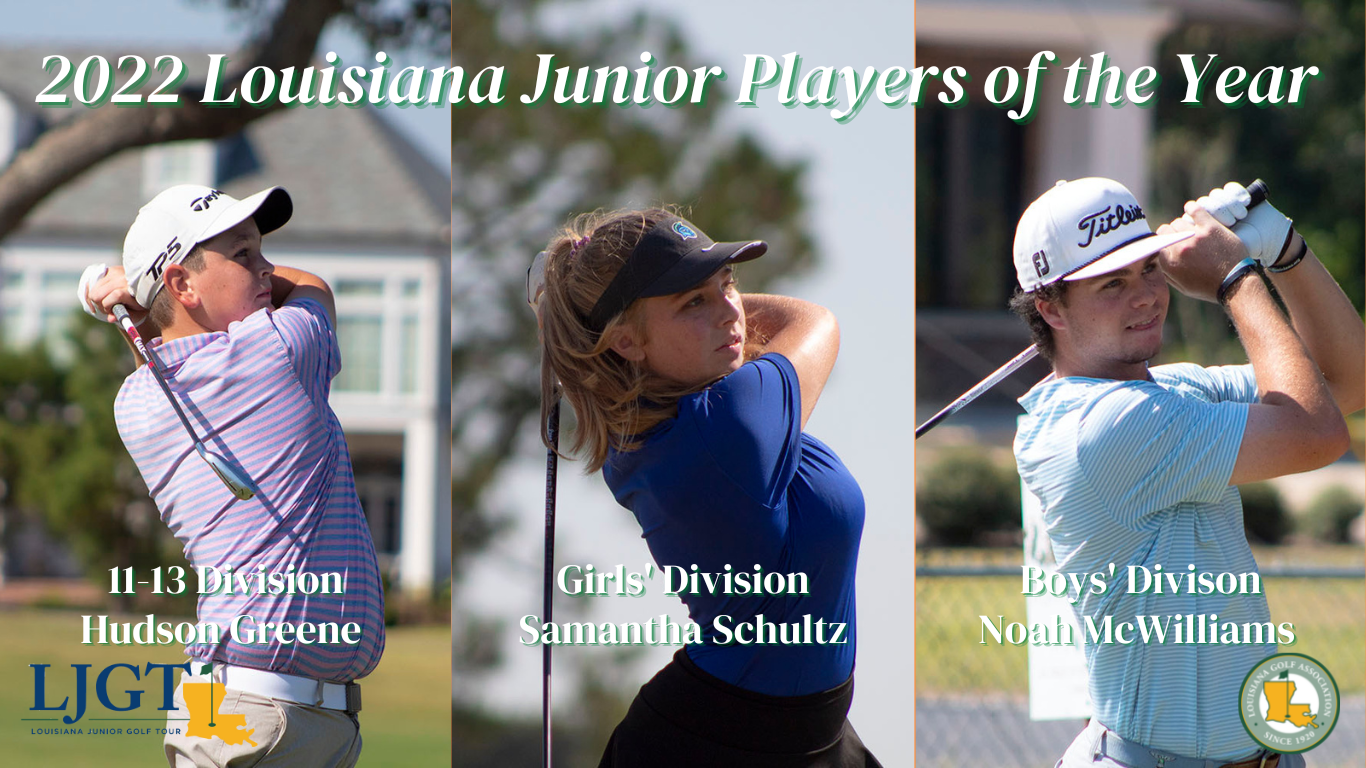 Schultz wins her first POY award in a tightly contested race. Coming into the Tour Championship at Lake Charles Country Club, Schultz was in 9th place and needed a strong finish to secure POY honors. She was able to achieve that strong finish and placed runner-up in the last event of the year to catapult her to the top of the standings. Schultz finished 15 points ahead of both Mattie Purgahn of Lake Charles and Sydney Moss of Shreveport. Schultz had a steady 2022 season that included one win in the LJGT at Squire Creek in July.

Schultz and her partner Sweden Ledet finished third in the Sam Burns Junior Four-Ball Championship at Squire Creek to start the season, and Schultz would finish in the top three in every LJGT event in which she competed in 2022. She made the Round of 16 in the Women’s Amateur Championship at Le Triomphe Golf & Country Club, and she placed seventh in the Louisiana Girls’ Junior Amateur Championship at East Ridge Country Club. Schultz will graduate from Christ Episcopal School in May of 2023 and has verbally committed to play college golf at The University of West Florida. The LJGT is proud to honor her with the Louisiana Girls’ Junior Player of the Year, and we wish her the best when she moves on to the college ranks.

Noah McWilliams successfully defended his Louisiana Junior Player of the Year in dominating fashion. McWilliams has clearly established himself as the #1 junior golfer in the Bayou State, and he’s the first to win back-to-back POY honors. McWilliams competed in five Louisiana Junior Golf Tour events winning an impressive three of them. As much as this season for Noah was about dominating, he also showed consistency and the grind to continue to get better. He already had a Player of the Year award under his belt and a commitment to play college golf, but McWilliams was still was looking to find ways to compete and get as much experience as possible against top competition. In addition to his three wins on the Tour, he finished T6th in the LJGT at Squire Creek and seventh in the Sam Burns Junior Four-Ball with his partner Brown Snyder of Benton. McWilliams would also finish runner-up in the 65th Louisiana Junior Amateur Championship. Noah is set to graduate from Benton High School in May of 2023 and is committed to play college golf at Louisiana State University. Among other accolades, this POY award earns Noah an exemption into the 51 Southern Junior Amateur, to be conducted June 14-16, 2023 at the Baton Rouge Country Club. As Noah’s time as a junior golfer comes to a close, he will go down in history as one the most decorated Louisiana Junior Golf Tour players of all time.

For the second year in a row, the Boys’ 11-13 Player of the Year race came down the LJGT Tour Championship. This year it included three players vying for the top spot: Hudson Greene of Bossier City, Noah Chauvin of Broussard, and Slayte Guidry of Logansport. With Greene’s exceptional play throughout the season, he came into the Tour Championship with a 20-point lead over Chauvin and an 80-point lead over Guidry, giving him a slight cushion. They were all tied for first place after 36 holes in the Tour Championship. Guidry, the 2021 Player of the year, was able to secure the Tour Championship victory, but it was not enough to overtake Greene’s consistent and stellar play throughout the season. Greene won the season race by 20 points over Chauvin and Guidry. Greene started the year with a top 3 finish at the Sam Burns’ Junior Four-Ball in near freezing conditions with his partner Wright Taylor of Madison, MS. Greene competed in six LJGT events finishing top three in all and winning the LJGT at Querbes Park in Shreveport, LA. Greene also finished as the runner-up in the 11-13 division of the 65th Louisiana Junior Amateur. After finishing runner-up in 2021 to his good friend Slayte Guidry, Greene reclaimed the bragging rights in 2022. Hudson has a tremendous amount of potential as he continues to develop as a golfer, and we look forward to watching him compete on the LJGT circuit for years to come.

It was an outstanding 2022 season for all three of our Louisiana Junior Players of the Year and the future is bright for Samantha, Noah and Hudson. A big congratulations to these exceptional players!