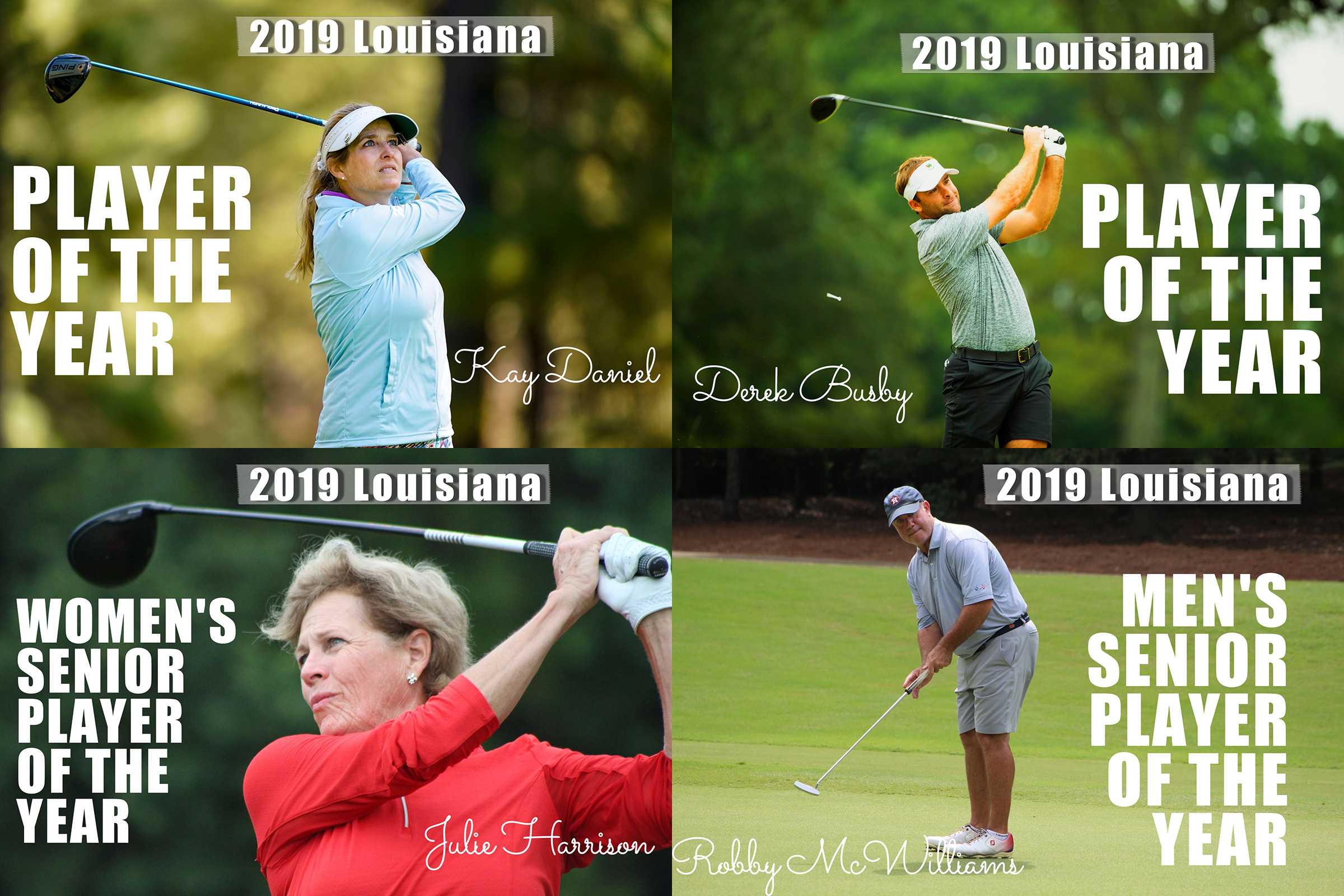 The LGA Player of the Year was an extremely tight race, with Busby amassing 275 total points and runner-up John Humphries of Woodworth finishing with 220 points. Busby, currently ranked 160th in the World Amateur Golf Rankings, had strong showings throughout his 2019 campaign. He successfully qualified for two USGA National Championships, advanced to U.S. Open Sectional qualifying, and his crowning achievement for the 2019 Season was his victory at the 28th Louisiana Mid-Amateur Championship at his home club, Squire Creek Country Club in Choudrant. His three-round total of 208 (eight-under par) put him in a playoff for the LGA Mid-Amateur Championship with Greg Berthelot of Baton Rouge. Busby would go on to win that playoff on the 1st playoff hole and earn 130 points in the LGA POY standings. Following his win at the LGA Mid-Amateur, Busby made the trek to Colorado for the U.S. Mid-Amateur Championship at Colorado Golf Club. Upon arrival in Colorado, Busby trailed the Louisiana Amateur Champion, John Humphries by 5 points in the POY standings. Busby needed to finish better than Humphries who was also on hand at the U.S. Mid-Amateur in order to seize the LGA Player of the Year title. Busby would do just that, qualifying for match play by shooting four-over par in 36-hole stroke play qualifying. Busby advanced to the Round of 32 after a hard fought 23-hole victory over Scott Harvey of Greensboro, N.C. Busby’s U.S. Mid-Amateur finish earned him 60 points and propelled him to his second Louisiana Player of the Year title in three years.

The LGA Senior Player of the year was an extremely tight race, with Benton’s Robby McWilliams emerging victorious over Tommy Brennan of Covington by just 25 total points. McWilliams’ Senior POY campaign was full of impressive highlights.  He had a comeback victory over Brennan at the LGA Senior Amateur Championship after firing a final round three-under par 69. McWilliams trailed by four shots entering the final round, and his victory earned him 105 points. McWilliams also made the cut at the LGA Mid-Amateur, finishing T12 (20 points).  As the season came to a close McWilliams would need to finish no worse than second at the LGA Senior Four-Ball to claim the Senior POY title. McWilliams and partner Rod Baronet left nothing to chance in that event as they fired a record breaking 19-under par 135 to win. That victory earned McWilliams the 80 points he needed to surge past Brennan for his first LGA Senior Player of the Year title.

Kay Daniel of Covington got off to a hot start this season, qualifying for the U.S. Women’s Amateur Four-Ball Championship with her daughter Abbey. The mother-daughter duo earned Medalist honors at the qualifier in Baton Rouge and went to make to the Round of 32 earning 90 total points as a result. Daniel captured her tenth Louisiana Women’s Mid-Amateur title (105 points) in May and finished as a Semi-Finalist in the 91st Louisiana Women’s Amateur (70), losing to eventual champion Alden Wallace of Shreveport. Daniel’s last counting event of the season was the U.S. Women’s Mid-Amateur Championship, in which she qualified for match play and advanced to the Round of 32. Daniel won the 2019 LGA Women’s Player of the Year in dominating fashion, finishing 135 points ahead of her daughter Abbey.

It truly was an outstanding 2019 season for all of our Players of the Year.  Congratulations to these incredible players!