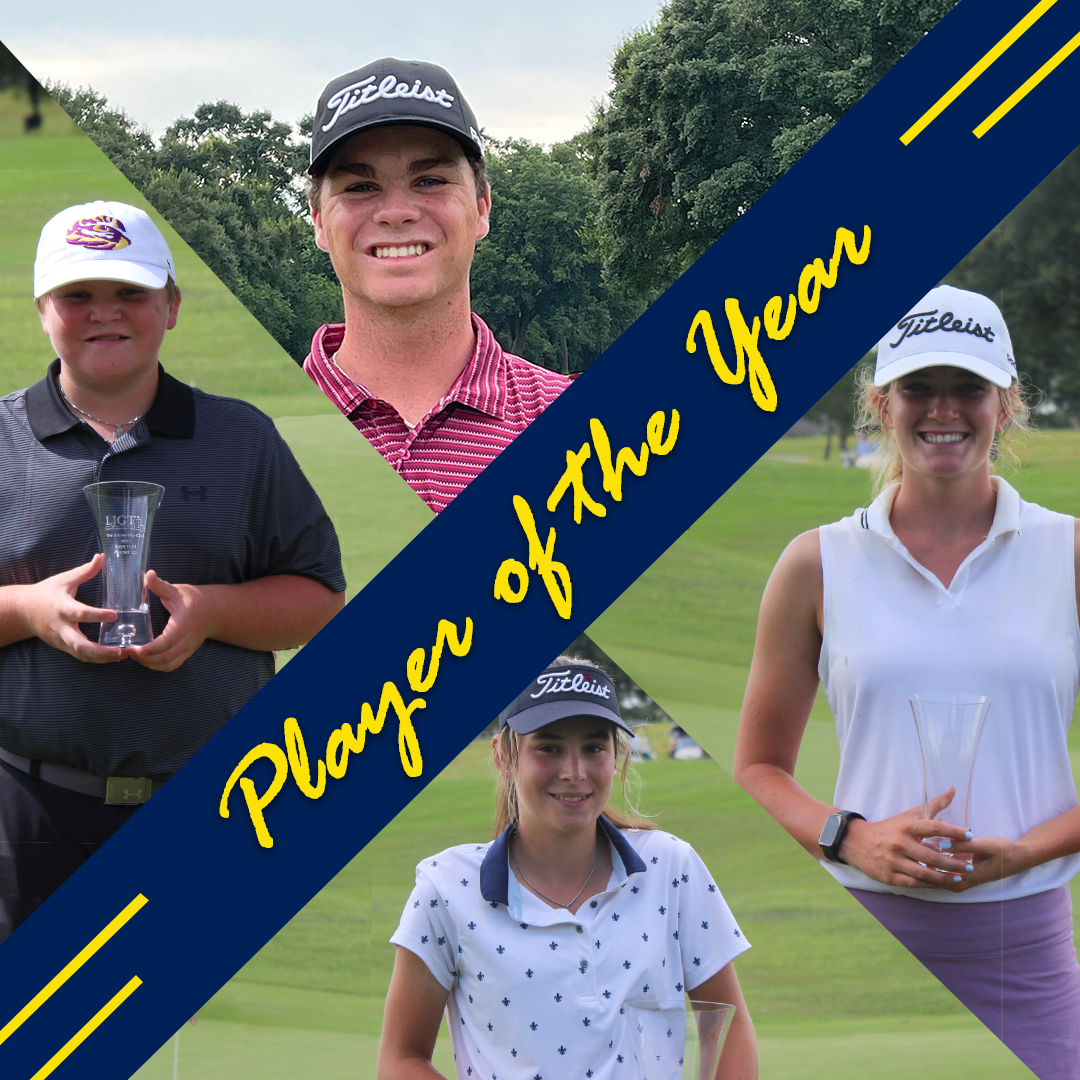 The junior boys and girls are about midway through their season, and have had the opportunity to play in four events so far. These events include the Sam Burns Four-Ball, LJGT at OakWing, the Boys’ and Girls’ State Junior Amateur Championships, and LJGT at UClub. Players are earning points to be Player of the Year based on how they finish in each tournament they play. They can also earn points for select other events including the Gulf States PGA Junior Championship and USGA Qualifying Tournaments. The race for Player of the Year has begun, and the current leaders are Noah McWilliams, Slayte Guidry, Sarah Knight, and Sarah Meral.

Noah McWilliams of Benton is on top of the Overall Boys’ leaderboard with 190 points. Noah has earned some of  his points by finishing tied for First at the Gulf States PGA Championship and tied for Second at the LJGT at OakWing. McWilliams also qualified for the PGA Junior Championship as well as the U.S. Junior Amateur Championship. Right on Noah’s heels is Eli Hill of Bossier City with 185.33 points. Hill most recently finished as the Runner-Up in the LJGT at UClub tournament. Not far behind McWilliams and Hill is Ethan Dial of Bossier City with 170 points, and Kale Fontenot of Lafayette and Boyd Owens of Baton Rouge with 165 points.

Leading the Girls’ Player of the Year rankings are Sarah Knight of Sterlington and Sarah Meral of Abita Springs with 385 points. As a team, they came in First at the Sam Burns Four-Ball. Meral recently came in First at the LJGT at UClub and was the Runner-Up in the Women’s State Amateur. Knight placed Second at the Louisiana Girls’ Junior Amateur and Third at the LJGT at UClub. Following behind Meral and Knight are Montana Dileo of Orange, TX with 250 points, Aubrey Stark of Abita Springs with 185 points, and Sydney Moss of Shreveport with 175 points.

In the Boys’ 11-13 Age Division, Slayte Guidry of Frierson leads with 295 points. Guidry has finished in Second at the LJGT at UClub and tied for Third at the Gulf States PGA Junior Championship. Right behind Guidry is Hudson Greene of Bossier City with 242.5 points. Greene has finished in First place at the Gulf States PGA Championship and the State Junior Amateur 10-11 age Division. Still on the hunt behind Guidry and Greene are Logan Heltz of Abita Springs with 220 points, Jayden Williams of Prairieville with 210 points, and Hudson Parton of Denham Springs with 180 points.

There are still a number of tournaments left in the season including the David Toms Junior Championship, LJGT at Tchefuncta, LJGT at Querbes Park, and the Louisiana Junior Golf Tour Championship. The official Player of the Year will be announced at the conclusion of the season.

You can keep up with the Player of the Year rankings with the POY Leaderboards.