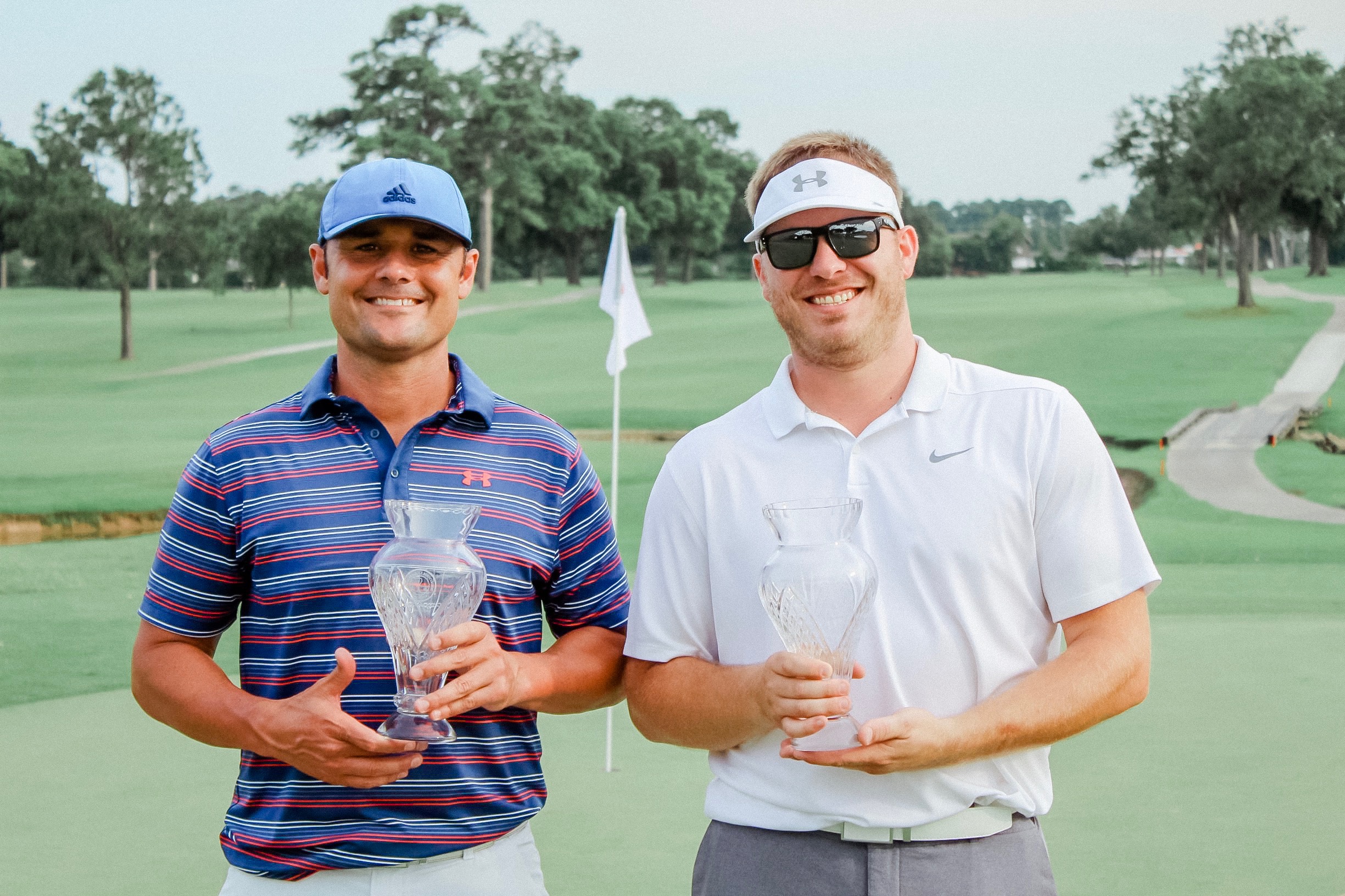 It was a jampacked leaderboard to start Sunday’s Final Round. After the final putt of regulation three sides were left standing. 18-hole leaders Jacob Broussard of Lafayette and Charlie Flynn of Alexandria tied the side of Brent Struthers of Baton Rouge / Page Breaux of St. Gabriel and John Henry Faulk / Shane Heinen of Lake Charles at 18-under par to force a sudden death playoff, which began at the par 5 1st hole. Faulk and Heinen, both members at Lake Charles Country Club, won in dramatic fashion after Henry drained a thirty-foot eagle putt at the 1st hole to claim the victory.

Rounding out the top 5 finishing in a tie for second at 18-under par are Jacob Broussard of Lafayette / Charlie Flynn of Alexandria (62-64-126) and Brent Struthers of Baton Rouge / Page Breaux of St. Gabriel (63-63-126). In solo fourth place are Jeremy Gautreaux of Prairieville / Brandt Garon of Jackson shooting 17-under par (64-63-127). Eric Hoffman of Denham Springs / Dante Caldera of Greenwell Springs (66-63-129) and Eric Brown / Hunter Crochet of Lake Charles tied for 5th place at fifteen-under par 129.

Heinen and Faulk got off to a hot start making three birdies in their first five holes. They stumbled at the 6th hole, a challenging 196-yard par 3, with a bogey.  The Lake Charles duo quickly bounced back with consecutive birdies by Faulk on holes #7 and #8 and then Heinen made a birdie on the par 4 9th, making the turn at 5-under par 31. The run wouldn’t end there as Faulk made birdie on the par 4 10th hole and Heinen made eagle at the 494-yard par 5 11th to cap off a 6-under par stretch over 5 holes. Heinen would go on to make the final birdie for the side on the 427-yard par 4 13th hole. After five straight pars Faulk and Heinen were tied at the top of the leaderboard at 18-under par and headed to the sudden death playoff. A good drive by Faulk and a second shot that found the putting surface some 30 feet from the hole, would line up a chance for eagle and the win. Faulk hit the perfect line and the perfect speed to drain the 30-footer to capture victory with authority.

It was another sunny summer day for golf in Southwest Louisiana with temperatures rising to the low 90s. The golf course, which took on over five inches of rain earlier in the week dried out nicely, and the greens were absolutely pure. This is the 13th time Lake Charles Country Club has hosted an LGA Championship, tied for 6th most among all LGA member clubs.  A perfect showcase of the spectacular conditioning and layout for the 100-year-old venue. The course drew rave reviews from the state’s best players.

The Lake Charles Country Club course played to a par of 72 at approximately 6,582 yards on Saturday.