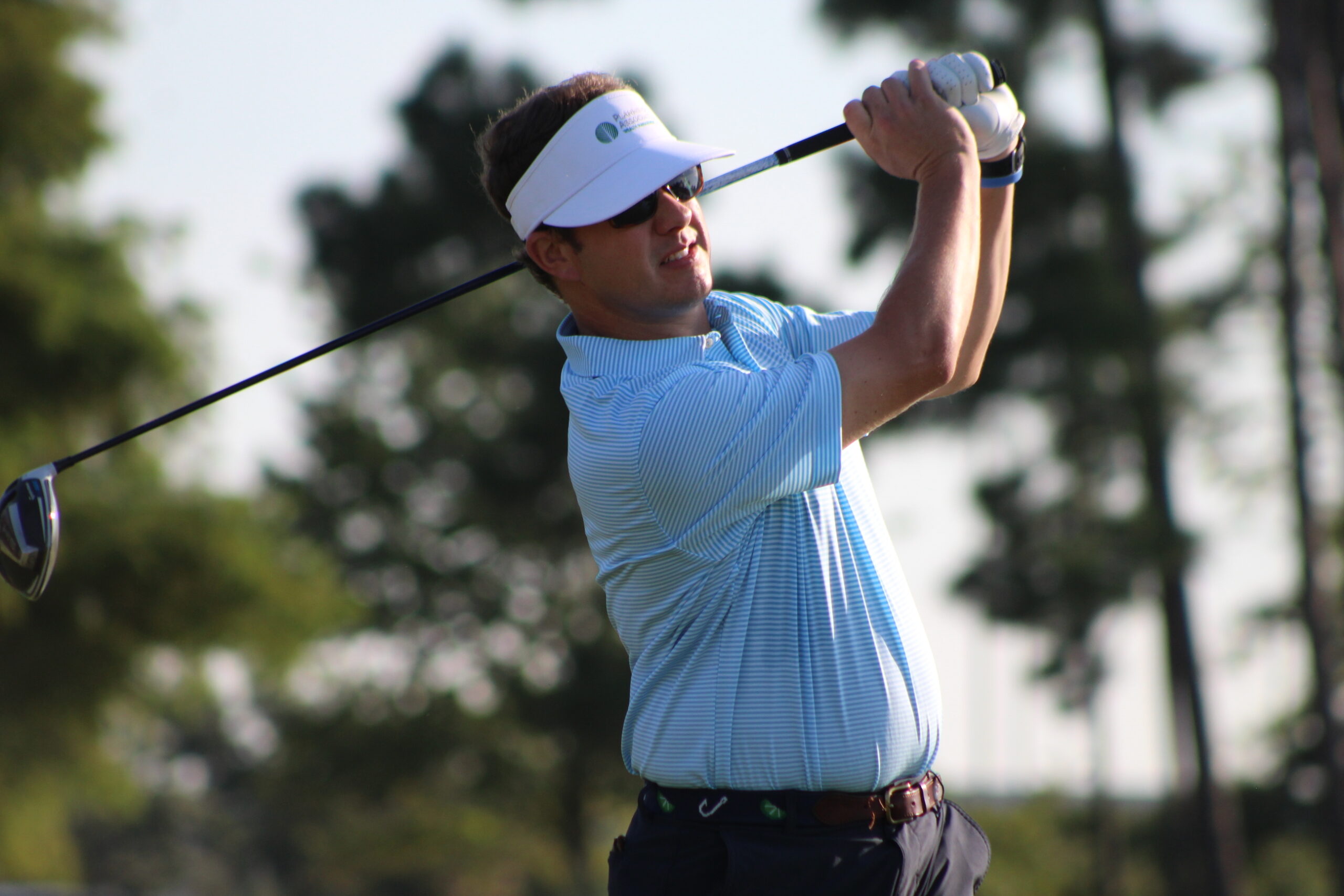 Andrew Noto of Metairie fired a three-under par 68 on Saturday at Contraband Bayou Golf Club to take a one-shot lead through 36 holes of play at the 29th Louisiana Mid-Amateur Championship. After an opening round 67, Noto was four-under par for the championship when he started his second round on the first tee at 8:33 AM. He had the mojo working early, making birdies on five of the first seven holes. Following back-to-back pars on holes #8 and #9, he made the turn at five-under par 31. He started his back nine very steady with four consecutive pars before adding another birdie at the par 4 14th hole. Noto’s nemesis this weekend has been the par 5 15th hole. He made his second double bogey in as many rounds on Saturday at this challenging par 5. Noto, who is currently at 7-under par 135, would be running away with this championship at 11-under par if he had been able to make a par on hole #15 in Rounds 1 and 2. Nonetheless, he has played brilliantly thus far and has a tremendous opportunity to win his first LGA Championship on Sunday.

First round leader and four-time Champion Patrick Christovich of New Orleans shot an even par 71 on Saturday and is just one-shot behind Noto at six-under par 136. Also tied for second at 136 is 2009 Louisiana Mid-Amateur Champion Matt Nicholas of Lake Charles. Nicholas has carded rounds of 67 and 69 and has only made one bogey through 36 holes, the lease amount of anyone in the field. Noto, Christovich, and Nicholas will be in the final pairing on Sunday.

Greg Berthelot of Baton Rouge, Mike Stackus of Zachary, and Jonathan Jeter of New Orleans are in a three-way tie for 4th place at four-under par 138. Eric Gibbs of Ruston had the low round of the day, a five-under par 66 which catapulted him to solo 7th place on the leaderboard (139).

The Tom Fazio designed Contraband Bayou course played to a par 71 at approximately 6,823 yards on Saturday and the course drew rave reviews from this field of the best amateur golfers in Louisiana over the age of 25. Contraband Bayou is hosting the Louisiana Mid-Amateur Championship for the first time in its history, and it will also host the U.S. Mid-Amateur Championship Qualifier on Monday.