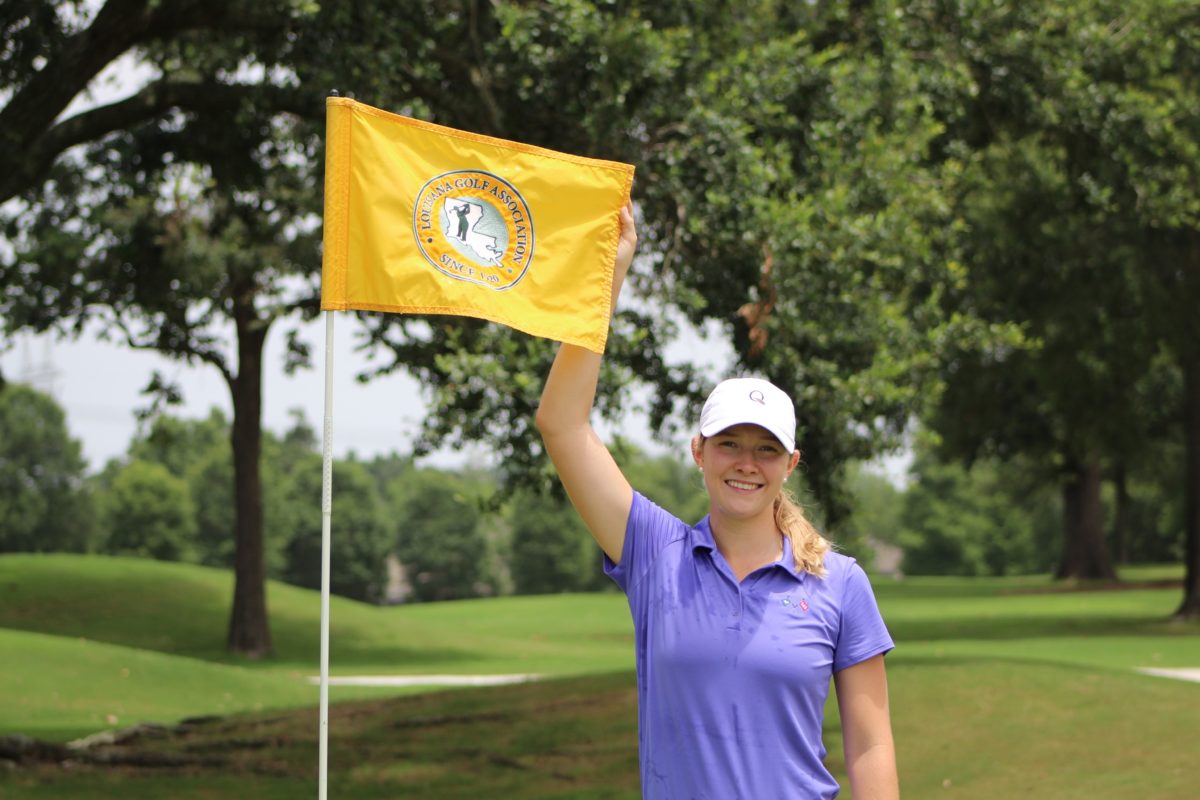 Alden Wallace of Shreveport defeated Abbey Daniel of Covington 2 up to win the 91st Louisiana Women’s Amateur Championship at the Country Club of Louisiana. Wallace, a rising sophomore at LSU, made three birdies on the front nine to seize the momentum and she never trailed in the final match. Daniel, the 2018 Champion, battled back from 3 down thru 14 holes to take the match to the 18th hole. Daniel will play at Mississippi State this upcoming season, so expect quality golf for many years to come from these bright young SEC stars. Wallace entered the Round of 16 as the #9 seeded player, and she defeated a higher seed in each of her four matches, including a 3 & 2 victory over medalist and #1 seed Brooke Tyree on Tuesday morning and a win in 19 holes against 2005 Champion and #5 seed Kay Daniel on Tuesday afternoon. For Wallace, those wins were not “upsets.” She has a confidence and cool demeanor on the golf course that serve her well in match play. The final match was payback for Wallace who lost to Abbey Daniel on the 18th hole in the semifinals of the Louisiana Women’s Amateur Championship a year ago. Wallace said of her incredible final round, “It was climactic the entire time. Abbey is a really strong player, and I knew that my lead could go away at any moment. I just tried to keep the pedal down and keep the next tee.”

Wallace started the final match in style, with back to back birdies at the par 4 1st hole (366 yards) and the par 5 2nd hole (472 yards), and she held a 1 up lead thru four holes. Wallace made an incredible birdie at the par 5 5th hole (470 yards) to go 2 up. Wallace and Daniel both made par on the signature par 3 6th hole. The par 4 7th hole was playing shorter on Wednesday at 320 yards. Wallace hit a utility club off the tee while Daniel hit driver. Wallace had an awkward lie for her second shot and mishit her approach short of the green. Daniel was safely on in two, but Wallace showcased her touch around the greens and chipped her third shot to five feet. Daniel would three putt, and Wallace saved par to go 3 up. Daniel bounced back to win the 8th hole and both competitors made par on the next four holes, so Wallace was 2 up when they stepped on the teeing ground at the par 3 13th hole, which she won with a par to increase her lead to 3 up. Both competitors made par at the par 4 14th hole. Wallace stumbled at the par 5 15th hole with a bogey and gave one back to Daniel. Routine pars at the par 4 16th hole brought Wallace’s lead to 2 up with two holes to play. Daniel made a clutch par at the 17th hole while Wallace stumbled with a bogey, and the lead was just 1 up. Daniel hit her tee shot at the par 4 18th hole into the bunker on the right side of the fairway and had to lay up short of the green. Wallace also missed the fairway to the right and was blocked out by trees. She punched out short of the green. Both competitors hit solid third shots, but Daniel was away and missed her par putt. Wallace drained her twelve-foot par putt straight up the hill to a back-right hole location to win 2 up.

The Country Club of Louisiana course played to a par 72 at approximately 6,100 yards on Wednesday. Superintendent Ed Pippin and his crew worked tirelessly all week to get the course ready and in Championship condition. It drew rave reviews from the top amateur competitors in the state. The Jack Nicklaus designed course boasts some of the best putting surfaces in the state, and the greens were rolling at a smooth 11 on the stimpmeter.

Second Flight Champion is Suzanne Tinsley of Shreveport (4&2) over Wendy Kahn of Kenner.

The 92nd LGA Women’s Amateur Championship will be conducted at Tchefuncta Country Club in Covington.