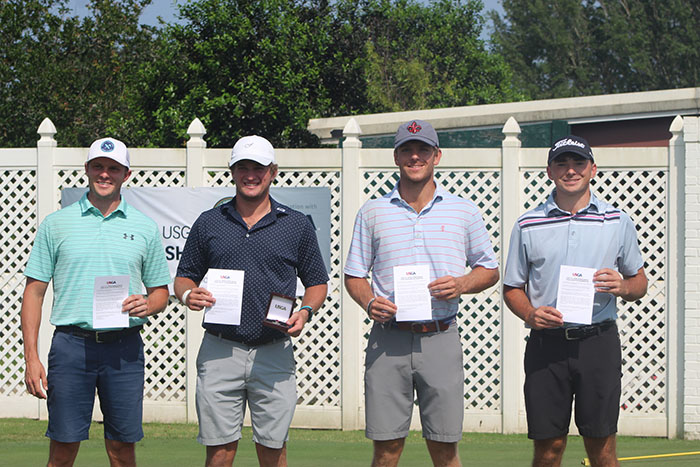 Barber, a junior on the LSU golf team, is currently ranked 149th in the World Amateur Golf Rankings. He shot 32 on the front nine and 33 on the second nine en route to the impressive 65. Barber took advantage of his length off the tee and played aggressively, making birdie on all four of the par 5’s at Oakbourne on Thursday. He also birdied holes #1, #6, and #12. Flynn and Hinnant are teammates at the University of Louisiana at Lafayette, and their home course is Oakbourne. Their local knowledge served them well on Thursday. Pierce, a touring professional, finished his round in incredible fashion, making birdie on six of the last eight holes to qualify.

Blake Caldwell of Ponchatoula, Louisiana, Joel Myrick of Hattiesburg, Mississippi, and Michael Smith of Lafayette, Louisiana finished at three-under par 69. Smith made a par on the first playoff hole to claim First Alternate, with Caldwell settling for Second Alternate.

The weather was perfect for golf on Thursday, with sunny skies and temperatures rising to the mid-80’s and a slight breeze. The Dick Wilson-designed Oakbourne Country Club, which will host the Louisiana Golf Association’s Senior Amateur Championship next week, was in excellent condition for this qualifier and drew rave reviews from participants. Course Superintendent Jason Barras and his crew worked tirelessly all week preparing the course and getting it in championship condition.

There were a total of 64 competitors at this Local Qualifier conducted by the Louisiana Golf Association, in association with the USGA.  Oakbourne Country Club played to a par of 72 at 6,903 yards on Thursday.