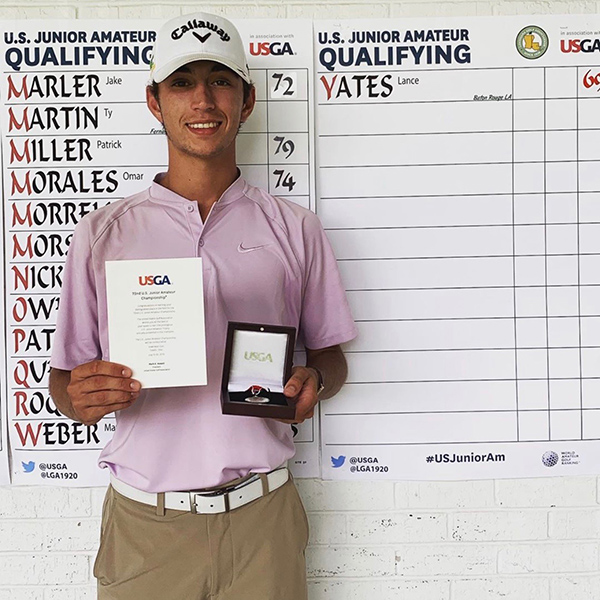 Lance Yates of Baton Rouge fired a three-under-par 69 on Tuesday to capture medalist honors at the U.S. Junior Amateur Qualifier, conducted by the Louisiana Golf Association (LGA) in association with the USGA, at Oakbourne Country Club in Lafayette, Louisiana. He will advance to the Championship proper at Inverness Country Club in Toledo, Ohio, to be held July 15-20, 2019.

Starting his round at 8:51 AM, Yates was one-over par through the front nine on Tuesday, catching fire on the back with a birdie on the short par four 12th, then consecutive birdies on #15, #16, and #17, finishing at four-under 32 on the back to fire his 69. He bested a strong field of 36 other competitors for the one available spot at Oakbourne. First alternate is Mauricio Figueroa of Guadalajara, Mexico, one shot back of Yates at two-under par 70. Jose Dibildox, from Saltillo Coah, Mexico, and Holden Hamilton of Kingwood, Texas, both shot one-under par 71 to tie for third, with Dibildox winning a playoff for the second alternate spot.

The first group teed off at 7:39 AM, with the final group finishing their round just after 1:30 PM. The weather was unseasonable for this time of year in south Louisiana, with temperatures only reaching the mid-80’s and overcast skies throughout the day. Storms stayed north and west of the course, never threatening to dictate a suspension of play, although the playoff between Dibildox and Hamilton was delayed by lightning. The Dick Wilson-designed Oakbourne Country Club course, annually rated as one of the best courses in the state by Golf Digest, played to a par of 72 at just under 7,000 yards. The OCC course, which has also hosted numerous Louisiana Golf Association Championships, was in excellent condition even after receiving almost an inch of rain on Monday.