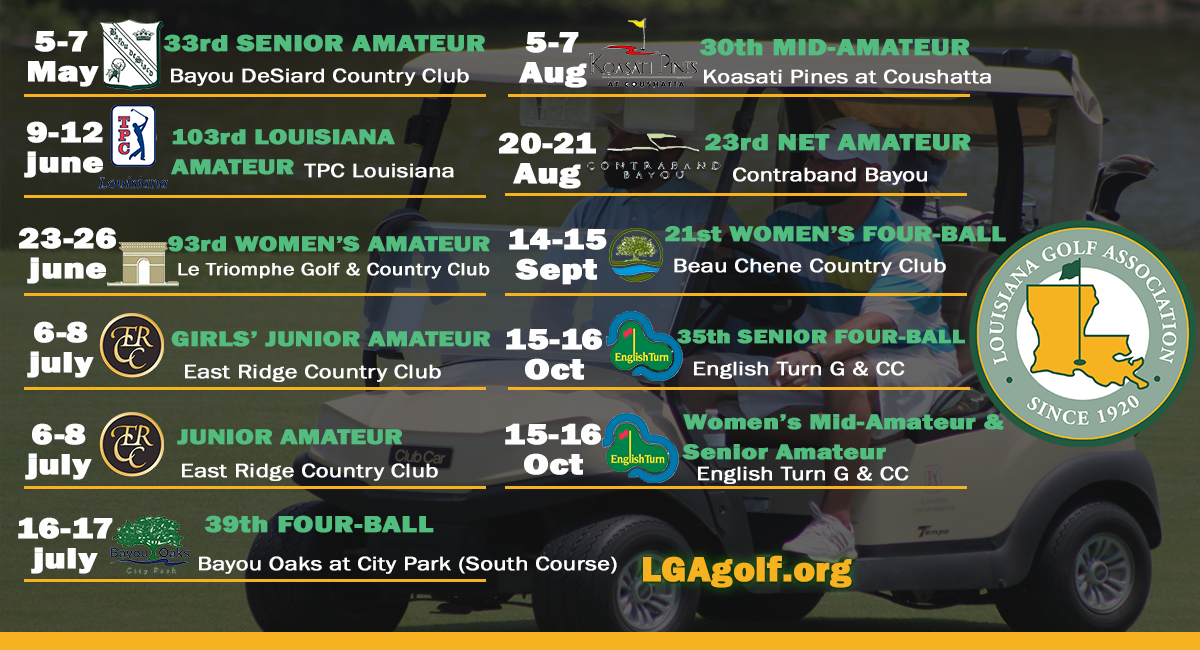 The Louisiana Golf Association (LGA) is pleased to announce its 2022 championship schedule. The LGA will once again conduct twelve Championships, in addition to sixteen Louisiana Amateur and Mid-Amateur Championship Qualifiers. The LGA is an Allied Golf Association of the USGA, and as such, the governing body for amateur golf in Louisiana will conduct seven qualifiers on behalf of the USGA in 2022. “We are excited about our 2022 schedule and the quality venues we can provide our members with an opportunity to play,” said LGA Executive Director Logan Ray. “The schedule showcases premier LGA member clubs across the state that give back to the game by hosting our Championships, and we sincerely appreciate their support. The LGA is proud to provide first-class competitions for all golfers, and we look forward to welcoming everyone next season.” 2022 is sure to be a fantastic and memorable year for amateur golfers in the Bayou State.

The stellar 2022 LGA championship calendar is highlighted by the 103rd Louisiana Amateur Championship, to be conducted at TPC Louisiana in Avondale, June 9-12. Registration for the Amateur Championship will open April 1, with an entry deadline of Tuesday, May 10 at 5:00 PM. The Pete Dye designed TPC Louisiana is the home of the PGA Tour’s Zurich Classic, and this will be a wonderful opportunity for amateur competitors to “play where the pros play.” TPC Louisiana, part of the TPC Network (owned, operated and licensed by the PGA TOUR) completed its highly anticipated bunker renovation project earlier this year. As a continuation to a previous course renovation in 2019, the project – which began in October 2020 – included 14 of the 18 holes being renovated, rebuilt, grassed and/or having through-the-green areas installed – shrinking the overall square footage of the bunkers from 9.9 acres to 2.7 acres. During the project, many of the bunker floors were raised and new drainage systems were installed, allowing the maintenance staff to bring the course back significantly faster after rain.

The enhancements were well received by the PGA TOUR professionals at the 2021 Zurich Classic. TPC Louisiana also hosted the 2021 LGA Four-Ball Championship in June, and the golf course drew rave reviews from LGA members. TPC’s location, just 15 miles from New Orleans, also adds to the venue’s popularity. The golf course will play to a par 72 at approximately 7,100 yards for the 103rd Louisiana Amateur Championship, a stern but fair test. TPC Louisiana has always been a tremendous supporter of amateur golf and has hosted numerous LGA Championships. This will be the third time in its history to host the Louisiana Amateur Championship (2007 and 2012 previously). “TPC Louisiana was built to host tournament golf at the highest level and we’re honored to be hosting our 3rd LGA State Amateur,” said TPC General Manager Luke Farabaugh. “I believe our course creates an environment that elevates the competition amongst the participants that ultimately identifies the best player in each tournament we host.  Our staff is excited to showcase our facility to the best amateurs in the State and crowing the 2022 Louisiana State Amateur Champion.”

The LGA will take the 94th Louisiana Women’s Amateur Championship to Le Triomphe Golf & Country Club in Broussard, June 23-26. The Robert Trent Jones, Jr. designed Le Triomphe signature championship course is beloved, tried, and tested as the home of the Korn Ferry Tour’s Louisiana Open for the last 29 years. Le Triomphe is a par 72 and boasts five par 5’s and five par 3’s on a beautiful layout. It has always been a “can’t miss / must play” site when it’s on the LGA calendar. The course has its share of challenging holes, but it also has plenty of scoring opportunities that will provide the stage for an exciting weekend of match play for the best female amateur golfers in Louisiana. This marks the first time in the storied history of the club that Le Triomphe will host the LGA’s marquee women’s championship, and it comes at the ideal time. Le Triomphe recently completed a multi-million-dollar renovation. The golf course is, and will be, in excellent condition.

The LGA Board of Directors formed a Women’s Championship Committee this year with the goal of enhancing the player experience and increasing participation in all of its women’s championships moving forward. One of the significant changes to the Women’s Amateur is a shift from a Monday to Wednesday event to now Friday through Sunday, with practice rounds on Thursday. There will be a dinner for players and guests on Thursday evening at the Le Triomphe clubhouse as the LGA celebrates the women’s game and showcases the unrivaled hospitality at Le Triomphe. “Le Triomphe Golf and Country Club is excited to be part of enhancing the player experience for women’s championship golf,” said Thomas T. Wartelle, Le Triomphe’s Director of Golf.  Logan Ray added, “Our Women’s Amateur competitors are in for a treat next season. When Le Triomphe commits to something, they go above and beyond… It is inspiring to see the club’s leadership and membership buy-in to supporting the women’s game wholeheartedly.”

Three other takeaways from the schedule release are:

Please note that the LGA Amateur and Mid-Amateur Qualifiers and all USGA Qualifiers will be released in December.